Amy Coney Barrett is a Fraud

Posted on Thursday, 15 October, 2020 by Euroyankee 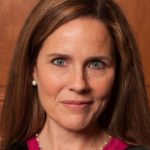 Amy Coney Barrett is currently the latest judicial lightning rod, drawing virtually universal condemnation from one side of the political divide and universal praise from the other.

Still, it seems that everyone from the Left who is engaging in that “debate” is failing to see the real threat she poses.

Everyone makes a big deal of the idea that she might vote against Roe v. Wade, but that is missing the point. That is what the Establishment want us to think about. “Oh no,” the Democrats say, “she will overturn Roe!”- HORSESHIT.

The Democrats have had 47 years – almost a half a century – to actually codify the Roe decision into law. The right of a woman to control her own body should NOT be left to the courts. People say that the right to an abortion is “the law of the land” but that is HORSESHIT. There is no law that says a woman has the right to an abortion. Abortion rights are all predicated on the Supreme Court’s 1973 decision that a woman has a “right to privacy” when choosing to have an abortion. A very tenuous position at best.

But that position suits the purpose of the corporate oligarchy. By refusing to make abortion legal through actual legislation, the Democrats get to use the Supreme Court as a cudgel to beat recalcitrant Leftists over the head every four years. “You HAVE to vote for the Democrat, otherwise they will overturn Roe v. Wade!”. So the Democrats use the abortion issue to shame the Left into voting for the corporatist Democrat.

The GOP also gets to use the abortion issue as a carrot for their own base. Evangelicals in 2016 came out in droves to vote the morally repugnant Trump ONLY because he promised to nominate “pro-life” judges to the Supreme Court. And he has delivered on that promise, which is why 90% of Evangelicals  still support him in 2020. Despite the Coronavirus disaster. Despite the economic catastrophe.

And THAT is why the Republicans never really tried to outlaw abortion through legislation. Why should they? The abortion issue is a huge “get out the vote” issue for them too.

“Defending” the ACA – How Pelosi Plays Us for a Fool

Another issue that the Democrats raise about Amy Coney Barrett is that of the Affordable Care Act. The Court is due to hear a case attacking that law as well. And so they tell us we MUST vote for Joe Biden in order to defend Obamacare. MORE HORSESHIT.

Nancy Pelosi and the Democrats could easily make the whole case go away with a one-line amendment to the ACA that does away with the so-called “personal mandate.” The mandate is functionally inert anyway, since Congress eliminated the individual mandate penalty back in 2017. And guess what? The ACA is surviving just fine without it.

But Pelosi and the Democrats won’t do it. They are stubbornly refusing to save the ACA from a legal threat before the Supreme Court. Because they also want to use this issue to shame Leftists into voting for Biden and other corporate candidates. 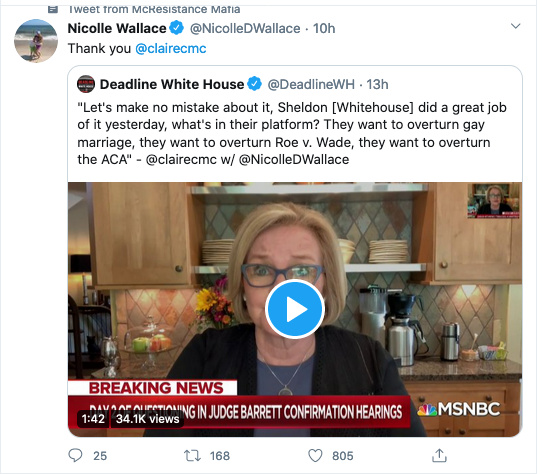 This tweet encapsulates what the Democrats and the Media are selling. Claire McCaskill represents the pro-corporate neoliberal Democrats, Nicole Wallace represents their minions in the mainstream Media.

The Real Threat is Hidden

No one is paying attention to the REAL issue. And that is that Amy Coney Barrett is a handmaiden to the Corporate Elite. When hearing labor disputes, Barrett sided with Corporations AGAINST working people a whopping 4 out of 5 times (76%). She is a HORRIBLE choice for the working people of America, but neither the Democrats nor the Republicans want to talk about that.

There is only ONE party on the US, the Corporate Party. And both the Democrats and Republicans have conspired to make the Supreme Court all about abortion and other social issues so that no one ever pays attention to the fact that conservative judges who don’t like Roe v. Wade also oppose workers’ rights and economic justice for the workers of America.

And here we see the FRAUD that is Amy Coney Barrett. She professes to be a devout Catholic. Dianne Feinstein famously told Coney Barrett that “the dogma lives loudly within you”. Well, if that is the case, then Judge Barrett should be OPPOSING corporations instead of siding with them.

Pope Francis himself, the infallible leader of the Catholic Church, has said so. In his latest encyclical, the Pope railed against the “idolatry of money”. Francis denounced the “tyranny” of unfettered capitalism “this dogma of neo-liberal faith”:

“The marketplace, by itself, cannot resolve every problem, however much we are asked to believe this dogma of neoliberal faith. Whatever the challenge, this impoverished and repetitive school of thought always offers the same recipes. Neoliberalism simply reproduces itself by resorting to the magic theories of “spillover” or “trickle” — without using the name — as the only solution to societal problems. There is little appreciation of the fact that the alleged “spillover” does not resolve the inequality that gives rise to new forms of violence threatening the fabric of society. It is imperative to have a proactive economic policy directed at “promoting an economy that favors productive diversity and business creativity” and makes it possible for jobs to be created and not cut.

Judge Barrett, if she really were a good Catholic, would heed those words. But she does not. She is what we call a “cafeteria Catholic” who picks and chooses only those articles of faith that suit her own personal secular interests.

If I were a Senator I would press her on those beliefs, and leave alone the issue of abortion and the ACA, which can be remedied through legislation.

After all, the vast majority of the cases that the Supreme Court is asked to rule on are issues of corporate power. The cases we should care about are ones like “Weyerhauser vs. US Fish and Wildlife” or “Gamble vs. United States.” It is very rare that issues such as abortion or healthcare come up.

What the SCOTUS does on a daily basis is deal with issues affecting economic policy and the relationship of corporations with society as a whole. And in that area, Amy Coney Barrett has proven that she will be a scourge to the hard working people of the USA.