Why Bernie Will Win – Part 4: The BIG Difference

Posted on Wednesday, 21 October, 2015 by Euroyankee

This post is a very easy one to write, because it is, in effect, a simple question: Will Hillary Clinton represent the interests of the working people of America? Hillary: here is a woman who has “served” as First Lady … Continue reading →

No one needs to discuss the differences on Foreign Policy that exist between Bernie and the Republican candidates. Those should be treated as a given. What has not been discussed publicly, however, and what bears real examination, is that these … Continue reading →

Tired of conservative and Clintonista trolls posting smack about our guy? Wish you had some statistics and facts to combat their BS? Want to set the record straight about Hillary and the First Debate in Las Vegas? Here is my … Continue reading →

Hillary goes after Bernie on guns; Bernie goes after Hillary on Wall Street and the Big Banks. It’s political tit-for-tat, right? Unfortunately for Hillary, these arguments are not equal in terms of scope and substance. As a Congressman and Senator … Continue reading →

Posted on Sunday, 13 September, 2015 by Euroyankee

There is another aspect of the Bernie Sanders campaign of which the establishment political set and the mainstream media seem wholly unaware: his direct and persistent appeal to people’s morality. Bernie’s full-throated attacks on what he calls “the billionaire class” … Continue reading →

An Open Letter to Howard Dean

Dear Governor Dean, I was a massive supporter of your campaign in 2004. I met you and Al Franken at a fundraiser in a NYC club one night, where we talked about high school wrestling – and I count that … Continue reading →

The establishment political set and the mainstream media seem to be wholly fixated on writing off Bernie Sanders as an “extreme Left” politician from a “small mostly white State” who is a “self-proclaimed socialist.” And because of these attributes (so … Continue reading →

Has Hillary Organised Her Own “Vast Conspiracy” with the Help of the DNC?

In 1998 Hillary Clinton claimed there was a “vast right-wing conspiracy” out to get her and her husband. It is thus ironic that today Hillary is the beneficiary of another vast conspiracy to sabotage her greatest political threat, Bernie Sanders. … Continue reading →

Iran has Reasons to Mistrust US

Look, the Iranians have a good reason to hate and distrust America. They elected a moderate “socialist” secular government in 1953. The government wanted to nationalize the oil industry in Iran, so the CIA had the legitimate, elected leader and … Continue reading →

Bernie vs. Ronnie Part III: This is Getting Weird

Big hullabaloo, brouhaha going on because the Democratic National Committee is only allowing 6 debates in the 2016 primary. Sanders and O’Malley are claiming this is just to “save” Hillary. Indeed, in 2008 they had 20+ debates, and Hillary lost. … Continue reading →

The dismissive attitude with which the Beltway Media as well as political pundits and leaders are treating Bernie Sanders has sounded, in a way, reminiscent of the way in which people – including myself – viewed Ronald Reagan in 1980. … Continue reading →

Bernie versus Ronnie – The Pendulum Swings!!

People wonder why / how Bernie can be so popular — the reason is clear: he has been consistent in his Liberal beliefs for at least 40 years. Imagine, a politician who is true to his ideals, even when they … Continue reading →

I took a train today from Barcelona to Madrid. The journey was 640 km, or roughly the same distance as from Boston Mass. to Washington DC. It took 2 hours and 30 minutes. No shit. Moreover, I did not have … Continue reading →

Posted on Sunday, 8 February, 2015 by Euroyankee 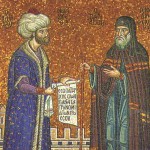 There seems to be a troubling trend in many areas of public discourse that aims to paint Islam as somehow different from other religions in its brutality, barbarism and militarism. This is simply wrong. Islam until recently was a relatively … Continue reading →

What Will Ebola Teach America?

Posted on Thursday, 16 October, 2014 by Euroyankee

So now we find out that the Texas hospital that hosted the first Ebola case diagnosed in the USA was woefully ill-equipped to handle the disease. The fact that the Liberian man who showed up at the hospital was (a) … Continue reading →

What Ray Rice and ISIS Have in Common

Posted on Friday, 12 September, 2014 by Euroyankee

Ray Rice, the NFL football player who is now being persecuted for beating a woman unconscious in an Atlantic City Casino elevator, probably thought he was going to get away with it. The security video that first propelled him into … Continue reading →

The “Tipping Point”, Militarised Police, and the Meaning of Ferguson

I have been watching trends in the US for some time. Macro-trends, if you will. And in Ferguson I see the confluence of three trends: on one hand, poverty and income inequality, on the other hand, militarised police with armoured … Continue reading →

Of Guns and Men

Posted on Saturday, 19 January, 2013 by Euroyankee

In “Bowling for Columbine“, Michael Moore made the case that the number of guns and the availability of guns is not causal in the number of gun deaths, There are plenty of examples where a country has as many if … Continue reading →

“Takers” versus “Makers” in Today’s GOP

Posted on Monday, 8 October, 2012 by Euroyankee

I have been thinking about the GOP – and especially the Romney/Ryan – arguments about “makers versus takers”. We all know about Romney’s views on “the 47%” . You may have also heard Ryan’s remarks in a similar vein: he … Continue reading →

One of the first things that one notices in Barcelona is the public cleaning and care-taking of the city. Throughout the city, throughout the day and night, an army of cleaners, clad in green and yellow hi-visibility uniforms, patrol the … Continue reading →