It seems that the DNC and the Superdelegates are determined to support Hillary Clinton even in the face of mounting evidence that she is a deeply flawed and weak candidate who is in serious peril of losing to Donald Trump in the General Election. 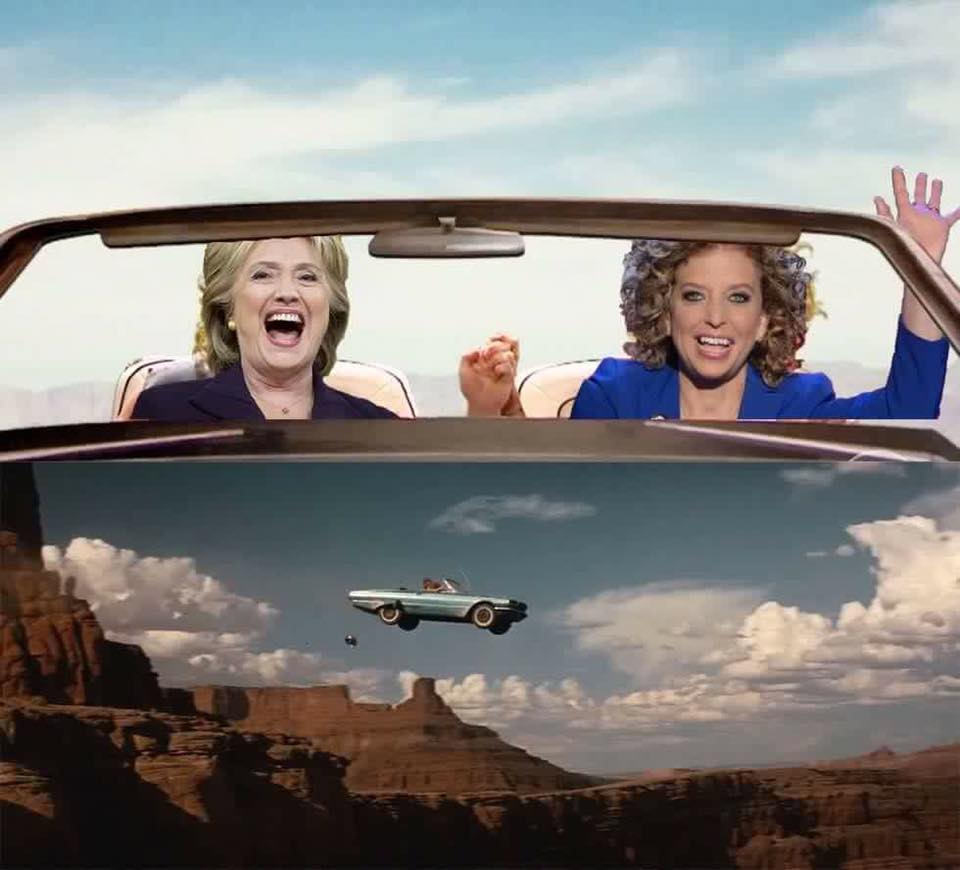 Upon her leaving the State Department, Hillary Clinton’s DNC allies wasted no time in setting up the Ready for Hillary PAC, an organization that was setup according to the new rules that were in place following the Citizens United Supreme Court decision. By September of 2013 the Ready for Hillary PAC was already involved in helping finance the campaigns of Clinton’s “down ballot allies” such as Terry McAuliffe in Virginia, and by 2014 the PAC even started to spread money around to 27 state Democratic parties and six national organizations such as Emily’s List.

Fast forward to 2015, when the Ready for Hillary operation split into the Ready PAC and the Hillary Victory Fund, which continued to funnel money to Democratic State parties and candidates.

The Clintons and the DNC are now one big corrupt entity Sen. Claire McCaskill is an example of the influence the Clintons have on the DNC

The Democratic Establishment is fully invested in Hillary Clinton, and vice versa. The two entities of the DNC and the Clinton Family are so intertwined that they cannot be separated. The Clintons invented pay-to-play politics back in the 90’s and now they have perfected and promoted the “system” to the point where they completely dominate that system. I would expect that a substantial amount of the DNC and state party funding is now due either directly or indirectly to Clinton contributions or influence. It is reminiscent of the Medicis and the Catholic Church in Renaissance Florence – financial and political patronage combined with Establishment “legitimacy”.

But here is the problem

Hillary is the weakest and most flawed candidate that the Democratic Party has ever put up for election. This is not a subjective opinion, it is an objective analysis. Her negative favorability numbers are well north of 50% and have been for most of the past 3 decades. In the Democratic Primary of 2008, Senator Chris Dodd famously opined at a candidate debate that Hillary was “unelectable” because polls showed that half the country would never vote for her. “We may not like it but a fact is a fact,” Dodd said, and “we as a party need to take that into account.” That was then, but this is now. Hillary still has astronomically high negative favorability numbers, but the Democratic Party is steadfastly refusing to heed Dodd’s words. The fact that a large majority of Americans consider her untrustworthy is a fact that is NOT being taken into account.

Aside from her blatant flip-flops, her wooden personality, and her universally acknowledged problems with appearing human on the campaign trail, Hillary Clinton has a major problem that is not going away: Hillary Clinton is at the center of a FBI criminal investigation. Despite the best efforts of both the Clinton campaign and the DNC to spin the investigation as a “security enquiry,” the FBI Director James Comey has confirmed that it is a traditional FBI investigation to ascertain whether laws have been broken.

This is mind-boggling. That a candidate under FBI criminal investigation could not only survive but flourish under the overt and protecting hand of a major political party is something that was unthinkable until this election cycle. Whether or not Hillary is indicted, whether or not anyone is indicted, is not at issue at this point. What is at issue is the fact that this “scandal” continues to raise questions about Clinton’s trustworthiness, her hubris, her preference to play outside the rules, or to bend those rules when they suit her.

Hillary is essentially tied with Donald Trump in the polls nationally, and is in a very weak position in key battleground states. Indeed, in the key swing state of Ohio, Trump is already beating Hillary by 4 points. And this is BEFORE Trump “pivots to the center.” Trump is already backpedaling on some of his more incendiary positions, a href=”http://www.euroyankee.com/wp-content/uploads/2016/05/HRC-Trump.jpg”> target=”_blank”>seeming to be OK with transgender Americans using the bathroom of their choice, implying that the minimum wage should be raised in America, and that the rich should actually pay more in taxes.

These U-turns are now added to the advantages Trump already had against Hillary in the areas of Trade and Foreign Policy, where he is attacking her for supporting NAFTA and other “bad” trade deals, and hammering her for supporting the Iraq war and generally being a war hawk who is too eager to go to war:

“On foreign policy, Hillary is trigger happy,” Trump told the crowd. “She is, she’s trigger happy. She’s got a bad temperament,” he said. “Her decisions in Iraq, Syria, Egypt, Libya have cost trillions of dollars, thousands of lives and have totally unleashed ISIS.”

“She came to my wedding. She had to, because I gave.”

And of course, Trump is attacking “Crooked Hillary” on corruption. Trump has a personal and compelling argument to make about Hillary because he contributed to her campaign and he saw a return on that investment. “She came to my wedding,” he says, “she had to, because I gave.”

Think about that: Trump has first hand knowledge of how the “corrupt political Establishment” works because it worked for him – with HILLARY!

If Trump can successfully tone down his rhetoric, his “leftist” positions on Trade and Foreign Policy will echo those of Bernie Sanders; his attacks on Hillary for being “in the pocket” of wealthy campaign donors and Wall Street will find a ready and willing audience, and he will succeed in capturing many of Bernie’s supporters who are Independents.

And the Democrats need those Independents in order to win. Membership in the Democratic Party has continued to dwindle, and now the Democrats represent only 29% of the American electorate (the GOP has 26%). A plurality of voters are now Independents (42%) and any successful campaign will have to court those voters. The solution is clear and simple – and that is to make Bernie Sanders the nominee. Bernie does not have the baggage of Clinton, he polls very high in favorability ratings, he is seen to be honest and trustworthy, and his positions ALL command majoritarian support among the American people. Most of all, Bernie is NOT under an FBI criminal investigation.

The utterly invalid push-back against Bernie

When forced to confront all the negative aspects of a Clinton nomination, Hillary supporters push back with the same story lines that we have been hearing from the likes of Claire McCaskill since Bernie first announced his candidacy:

“Bernie is not vetted” – this is ridiculous. Bernie has won 14 Congressional and Senatorial elections running as a Socialist Independent up against the Democratic AND Republican establishments, and in one case beat Vermont’s wealthiest man, who outspent Bernie many times over. He is certainly more thoroughly vetted than Barack Obama was.

“Bernie will be attacked as a Socialist/Communist who wants to raise your taxes” – this argument literally makes me laugh. I feel forced to ask the person making it whether they have been in a coma for the past 8 years. Has there ever been a campaign in recent memory where the Republican did NOT attack the Democrat as a commie who would raise taxes? The American electorate is wise to this sort of bunk, and coming from the Republicans, who have never ceased to compare Obama to Mao, Stalin, Castro, and even Hitler all at the same time, such arguments will fall on deaf ears.

Even the GOP admits that this election will be the first in decades where the size of Government will not be an issue, and that indicates a sea change in the electorate that Hillary is just not able to connect with. Remember, she and her husband were the ones that famously and proud;y declared that “the era of big government is over.” The fact that government is no longer seen as “the problem” is something that old-school DLC apparatchiks like Hillary and Bill Clinton simply cannot cope with.

To anyone paying attention, it is clear that the DNC and the Superdelegates, who have been “bought” by the Clinton campaign, cannot make a rational decision when it comes to selecting the best candidate to defeat Donald Trump. They will support Hillary up until the day she is indicted, and even then I am sure some surrogates would still be supporting her. But aside from the FBI investigation there are already many signs to indicate that she will lose against Donald Trump in the fall, whereas Bernie Sanders would win.

Die-hard Democrats accuse Bernie supporters of being naïve, of not accepting reality, in believing in a fairy tale dream. With Hillary, so the narrative goes, we will have a candidate that is practical and has been battle-tested. Yes, they say, her poll numbers are horrible, but that is only because she has been in the public eye for so long, and has suffered decades of scorn, scandal and vicious attacks.

But while Clinton supporters are quick to point out the history of attacks, they refuse to acknowledge the result: Only 19% of Americans think Hillary is trustworthy – that number can only go DOWN.

By contrast, fully 80% of Americans think that Bernie Sanders is trustworthy. And yet — they are convinced that Hillary Clinton, having spent 35 years in the public spotlight being constantly painted as a corrupt politician by her opponents, will be able to change the opinion of the American public in just a few months’ time. They steadfastly believe that she will overcome decades of opprobrium and negative polls quickly and successfully, and she will turn those numbers around all the while being attacked by an unscrupulous and outrageous media manipulator like Donald Trump, with the full funding and fury of the Right Wing and the GOP behind him.

Surely, this is madness.

2 Responses to Don’t Drink the Kool-Aid!! – The DNC’s Suicide Pact with Hillary Clinton