My Trip through Bill Clinton’s Arkansas

Posted on Wednesday, 2 November, 2016 by Euroyankee

In the late fall of 1990 a friend and I made a cross country trip from Connecticut to California. We decided to travel via the Southern route, which took us through Arkansas, where Bill Clinton was halfway through serving his second term as Governor. 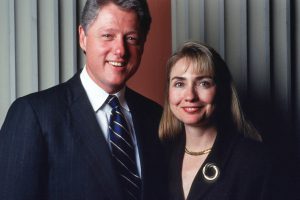 We overnighted in a town outside of Little Rock and the next morning we decided to stop for breakfast at a diner before hitting the road.

My Alfa Romeo Spider convertible looked really out of place in the parking lot filled as it was with F250’s and Dodge Ram trucks, many replete with gun racks (with guns!) and dogs in the back. When we entered, we ourselves stood out as the place was filled with men garbed in various levels of camouflage outfits accented with bright orange caps and vests – yes, it was full-on hunting season there. Oddly enough, the music playing in the café was not Country & Western, as you might expect, but rather vintage Motown.

We finished our breakfast, which included 100% more grits than I was used to, and made our way to the cash register to pay. Behind the counter was a very large red-headed woman who was bopping and humming to the strains of “Baby Love” by the Supremes. When she looked round and noticed us standing there, she smiled brightly and said, by way of excuse:

“Sorry boys, I guess I just have some of that ‘natural nigger’ in me.”

We were, as the Brits say, gobsmacked. I had not actually heard “the N-word” said to me since the late 60’s when my father inexplicably described The Beatles as “nigger music.” The woman, however, was completely oblivious to our stunned New England sensibilities and sprightly handed us our change accompanied by a hearty and sincere “y’all have a nice day.”

We left, hopped back into the Alfa, and headed West as fast as we could.

I never liked Bill Clinton. I had always considered him to be “slick Willy” and even during the 1992 Primary campaign (in which I supported Tsongas), I considered him to be too far to the right for me. This view was no doubt coloured by my experience in that café. How, I asked myself, could a true “liberal” ever get elected Governor of such a State? Let alone twice?

The answer, of course, is that a liberal could NEVER get elected Governor in the Arkansas of the 1980’s. In order to win, the Clintons had to court the support and backing of the State’s largest corporations, such as Wal-Mart, with a “laser-like” concentration on delivering legislation and tax policies that favoured those companies.

Bill Clinton’s slavish devotion to corporate interests eventually led him to become Chairman of the DLC, the Democratic Leadership Council, whose primary strategic goal was to transform the Democratic Party into a pro-corporate, pro-business Party that was identical to the Republican Party ca. 1970, but without all the racism and sexism. Over the next 30 years, the Clintons led the effort to create just such a Party – sailing under the banner of “Third Way” politics and calling themselves “New Democrats”, they moved the DNC ever more rightward, forcing the GOP itself to move even further to the Right and become the extremist Party that it is today.

The DLC had 16 huge corporations on its Executive Council, including, believe it or not, the Koch Brothers. They set the agenda, and the Clintons carried it out, under the guise of “liberalism.” Bill was mistakenly hailed as “the first black President” who could “feel your pain” – even as he gutted the social safety net, instituted mass incarceration and delivered goodies like NAFTA and the Telecommunications Act for his corporate sponsors. In short, the Clintons succeeded in transforming the Democratic Party into one in which Hillary, both as a Goldwater Girl AND a graduate of feminist Wellesley college, could feel at home.

Make no mistake – Hillary still desperately clings to that DLC vision for the Democratic Party. The “pay to play” system the Clintons developed in Arkansas has now evolved into a globe-straddling enterprise called the Clinton Foundation. And while Hillary was forced to pay lip service to progressive policies during the Primary, the recent email leaks prove that she remains that pro-corporate, pro-business DLC apparatchik from the 90’s. I am not surprised at this. The Clintons are what they have always been: devoted servants of the corporate interests that have made them incredibly rich and powerful.

I know many people are voting for Hillary as the Lesser Evil. That is their prerogative. I would only ask that Hillary supporters stop making arguments that Hillary is a progressive who will “get things done.” The things she will get done are those that Corporate America want done. This should not be a surprise. It is what she and Bill have always done.

EuroYankee is a dual citizen, US-EU. He travels around Europe, writing on politics, culture and such. He pays his US taxes so he gets to weigh in on what is happening in the States.
View all posts by Euroyankee →
This entry was posted in 2016 Campaign, Culture, Politics. Bookmark the permalink.