Posted on Tuesday, 26 February, 2019 by Euroyankee 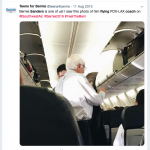 This is a corollary of Troll Smear #19 about Bernie’s houses and net worth. This smear also seeks to portray Bernie as a hypocrite, and tries to do so by making the following “arguments”: (1) Bernie claims to fight Climate Change but spent $300,000 on private air travel, polluting the air, and/or (2) Bernie claims to be a socialist but he insists on flying first class on private jets. Bernie made headlines with his “barnstorming” nationwide tour in October 2018

This is a really stupid smear because it is based on a provable fact but ignores the equally provable reasons for that fact.

Yes, in October 2018 Bernie Sanders spent $300,000 on private air travel, but that was because he did so at the behest of, and in service to, his colleagues in the Democratic Party.

In a prodigious display of stamina and dedication, Sanders pursued a 9-State Battleground Tour over the course of just 10 days, during which he made no less than 25 speaking events and rallies in 9 states.

As reported in the VT Digger:

Think about that. Bernie averaged more than 2.5 events and rallies each day as he crisscrossed the nation to help Democrats win the 2018 Primaries.

Jones said it was necessary to use a private jet service “to allow the senator to campaign in all of the states where candidates wanted his help and get back to Vermont in order to join the Vermont Democratic Party coordinated campaign’s final GOTV efforts. As Bernie often said while encouraging voters to get involved leading up to Election Day, this was the most important midterm election in our lifetimes and he wanted to have maximum impact.”

The article, however, goes on to describe the steps that Sanders is taking to offset the increased carbon footprint from private jets:

So although Bernie needed to use private jets to accomplish his goals and make all those events, he still made the effort to be as “green” as possible while doing so.  In a recent Politico article, Arianna Jones explained how and why Bernie needed to fly private:

Sanders held 18 “large public events in those days,” said Jones. “A review of airline flight schedules shows that this tour itinerary simply could not have been completed with commercial flights — it required a charter.”

She noted that the tour was the only time last year when Sanders flew on a private jet and also said the campaign purchased carbon offsets to zero out the emissions produced on the trip. Cars were also used on the ground whenever possible to get him to his events. She said that Sanders also flew commercial last year to hold more than 45 major rallies and events in 18 different states.

This variation of the smear is mostly used by right wingers who are seeking to attack Bernie the man as a hypocrite. But private jets were the only way for Bernie to make it to those 25 events in 9 states coast-to-coast.

And these butt-hurt Republicans are just bitter because – thanks in no small part to Bernie’s campaigning – the Democrats had a resoundingly successful 2018 midterm election. This POLITICO story was published shortly after Bernie announced his 2020 campaign.

This is a more widely used smear that is often wielded not just by right-wingers but by Clinton loyalists and centrist Establishment Democrats to attack Bernie as a hypocrite and a grifter who “uses” the Democratic Party for his own benefit.

“I’m not shocked that while thousands of volunteers braved the heat and cold to knock on doors until their fingers bled in a desperate effort to stop Donald Trump, his Royal Majesty King Bernie Sanders would only deign to leave his plush D.C. office or his brand new second home on the lake if he was flown around on a cushy private jet like a billionaire master of the universe,” said Zac Petkanas, who was the director of rapid response for the Clinton campaign.

Whoa there, “Zac”. I think you are being a little too rapid in your response.

The Politico article also tells the other side of the story, the truth about what really happened. The Clinton campaign set forth an almost impossible schedule for Bernie to follow. They had him crisscrossing the country to campaign in all those places where Hillary had not, and the only way that the schedule could have been kept was through using private air travel.

In the final three months before Election Day 2016, Sanders held 39 rallies in 13 states on behalf of Clinton’s campaign, according to Jones, including 17 events in 11 states in the last week alone. When he went to New Hampshire, which borders Sanders’ home state of Vermont, he did not use a private jet to get there.

Zac and his colleagues are engaging in revisionist history. They want to attack Bernie somehow, so this line of smear seems a good idea to them. However, the facts of the matter actually show just the opposite:

Sanders spokesperson Arianna Jones said it was physically impossible to get to all of the event locations in such a short period of time without chartered flights, especially since the senator was traveling to many smaller markets with limited commercial air travel options.

“Sen. Sanders campaigned so aggressively for Secretary Clinton, at such a grueling pace, it became a story unto itself, setting the model for how a former opponent can support a nominee in a general election.”

Rania Batrice, who served as Sanders’ deputy campaign manager at the end of his 2016 campaign, said that Clinton’s campaign would send over a proposed campaigning schedule for Sanders before the two sides talked through logistics:

So how much did Bernie spend on private jets while barnstorming the country doing Hillary’s campaigning for her? The Politico article explains:

The senator ended up flying private on three separate multi-day trips in the last two months of the campaign … [and] cost the Clinton-Kaine campaign … $100,000 in total.

In a campaign that spent $1.2 BILLION, Bernie cost them $100K to help him keep a schedule that THEY set up for him. So – BIG DEAL. That turns out to be 0.008% of her total campaign budget.

But exaggeration is not the worst part of these smears. The Clintonites are Taking a Page from Karl Rove’s Playbook

The most despicable aspect of these smears is that they are a deeply cynical and very hurtful way to attack an honest politician. It is 100% “Rovian” in that it takes one of Bernie’s most enduring – and endearing POSITIVES and turns it into a false NEGATIVE. This particular type of brazen character assassination was a specialty of Karl Rove. GW Bush’s campaign advisor, who famously came up with the Swift Boat attacks on John Kerry in order to turn his Purple Heart Medal of Honor service during Vietnam into an embarrassing stain. In attacking Bernie for flying first class and/or private, the Clinton camp is using the same tactics that the abominable Rove and his GOP henchmen used to take down Kerry: In other words, Bernie is being “Swift-Boated.”

Because all throughout the 2015-2016 Primary season, Bernie became famous for flying COACH. Fans even had a hashtag, #SandersOnAPlane for Tweets from people who had seen him or sat next to him on commercial flights. So, my fellow Berners. let’s not let these Hillbots and Clintonite scum rewrite history and pull a Karl Rove dirty trick on our candidate. Be sure to fight back every chance you get with this material.

Let’s “shoot down” this bullshit smear about airplanes.