Democrats Must Abandon Identity Politics and Run on Actual Policies 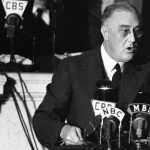 A Return to FDR-Style Progressivism will Return Dems to Electoral Victories for Generations to Come.

Identity Politics has formed the basis of the American political system since the 1990’s. It 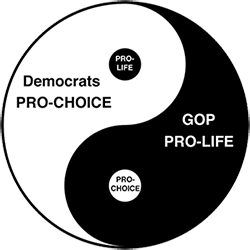 is enshrined in both parties’ political narratives, and it has become a major animating factor and GOTV (Get Out The Vote) force in both parties’ bases. Below, for example, is one graphic example of how Identity Politics is used to define the two parties around the issue of abortion:

Bernie Sanders and Alexandra Ocasio-Cortez — United on Issues, not Identity

Democrats have been widely criticized for not developing issues-based campaigns, and indeed the DCCC (Democratic Congressional Campaign Committee) and the cadre of Democratic campaign consultants have been caught actually telling candidates NOT to stake out firm positions on issues, to avoid listing specific policy positions on their web sites, and even to avoid specific issues and policy discussions when speaking in public.

The latest example of this is the issue of Healthcare. Many people such as Sanders and Ocasio-Cortez are now speaking about Single Payer healthcare and even calling for a “Medicare for All” program that will guarantee healthcare to every American. However, the DCCC is telling candidates NOT to talk about healthcare if possible and under no conditions to ever talk about Medicare For All. A leaked DCCC memo outlines the approved talking points on healthcare, which essentially are just talking about the horrible Republican plans for healthcare without offering any specific alternatives other than support for the current system of the ACA (ObamaCare).

In another example, the DCCC told its candidates to “limit the number of Black Lives Matter activists at public events and promise no support for ‘concrete policy positions’” regarding the #BLM priorities.

Indeed, this has been the standard Democratic playbook for decades. While the GOP has outlined specific goals and fixed policy proposals (such as the 1994 “Contract with America”), the Democrats have simply talked about how bad the GOP plans are, and the Democrats’ own policy “goals”, such as they are, are to simply oppose the Republicans. They promise to “defend”, to “fight” and to “protect” various existing programs, but they never really propose anything bold and new, and they never dare to say they want to expand those programs that are under threat by the GOP. Nancy Pelosi — the Democrat the GOP loves to hate, promising to protect what others did rather than try to expand or introduce something new. This is the language of LOSERS.

The Democrats consistently and deliberately avoid talking about issues and specific policies, opting instead to use Identity Politics to try to get voters to choose their candidates based on who they are rather than what they stand for.

As Thomas Frank has brilliantly described in his seminal book, Listen, Liberal!, Democrats now run on their resume rather than their platform. Perhaps the most blatant example of the Democrats’ reliance on Identity Politics was Hillary Clinton’s 2016 Presidential campaign. Although Hillary was by all accounts a policy wonk, she did not run on specific policy proposals. Rather, her campaign urged us to vote for her because of three main reasons:

The result was a campaign based entirely on Identity Politics, and as a study concluded, her TV ads were actually unprecedented in their almost complete lack of policy: In order for the Democrats to abandon their fixation on Identity Politics, the entire party will need to be, as Bernie Sanders has said, “transformed.” This means primarily changing the way in which the Democrats raise money.

Since the takeover of the Democratic Party by Bill Clinton and his pro-corporate DLC (Democratic Leadership Council), the Democrats have abandoned their traditional power base of Labor Unions in order to compete directly with Republicans for the lavish campaign cash offered by Corporate America and especially Wall Street. These Clintonite “Third Way” Liberals dropped the party’s New Deal obsession with the proletariat and instead sought to woo the wealthy.

As Thomas Frank also explained in Listen, Liberal!, the Democrats stopped being the party of the blue-collar working class and started representing the interests and priorities of the white-collar managerial and professional class. Ronald Reagan was now the “transformative” leader who was invoked and praised by every prominent Democrat from Clinton to Obama. FDR was regarded as a relic, and the New Deal was something that Bill Clinton and Barack Obama did their best to cut, roll back and/or eliminate wherever they could.

The DLC / New Democrat movement was thought to be a very clever strategy at the time, however no one seemed to care about what this “transformation” really meant: by representing Management and the owners/shareholders, the Democrats could not also simultaneously advocate and fight for the workers.

For the Democrats to abandon Identity Politics, they would need to run on issues and policies that would be popular with the greatest number of voters. This means siding once again with working people, whose economic interests would be diametrically opposed in many cases to the interests of the Democratic Donors.

This is the greatest challenge facing the Democrats — to change their funding mechanisms away from the wealthy corporations, banks and individuals who currently make up their Donor base.

Once they have decided to take that step, however, the political process of regaining control of the Government is very easy. All the Democrats need to do is return to their roots and return to the populist politics of FDR, Truman, JFK and LBJ.

In other words, they need to return to the political formula that kept FDR in the White House for four terms and and gave the Democrats virtually unbroken control of Congress for 60 years.. FDR promised the people specific policies. They elected him and re-elected him until he literally died in office.

The principles and policies that Democrats need to promote already exist. Long before the Republicans came up with their “Contract with America,” President Roosevelt set out what he called a Second Bill of Rights, also called the Economic Bill of Rights.

This bill of rights included, as FDR wrote:

All Democrats have to do is reclaim this FDR Bill of Rights, convert these principles into modern language and actual legislative proposals, and they will be able to once again dominate American politics for generations to come. The reliance on Identity Politics will, at last, be regarded as an anomaly, a blip, a time when the Democrats had lost their way.

And I am not the only one calling for this. The great John Nichols at The Nation has also called for reviving the FDR legacy:

Seventy Years On, Let Us Renew FDR’s Struggle for an Economic Bill of Rights Parts of this article first appeared in an answer on Quora.

EuroYankee is a dual citizen, US-EU. He travels around Europe, writing on politics, culture and such. He pays his US taxes so he gets to weigh in on what is happening in the States.
View all posts by Euroyankee →
This entry was posted in Neoliberalism, Politics. Bookmark the permalink.