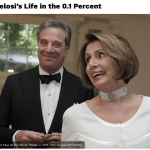 The Democratic Establishment has become an Orwellian nightmare – but more like Animal Farm than 1984.

First of all, I suggest everyone read Thomas Frank’s book, Listen, Liberal. In it, he makes the case that there is such a thing as the Liberal Elite. These are the people running the Democratic Party and most of DC. They are an Elite because they have advanced degrees from expensive universities; they went to the best schools, they live green, they support LGBTQ rights, abortion rights and all the other social issues that make up the current playbook of the Democratic Party.

Conservatives do not have this sort of class — or at least not to the extent that liberals do. Frank makes the point that for Republicans and Conservatives, the idea of Horatio Alger, the guy who started out with nothing and became wealthy, is more than just an apocryphal story — it is a core belief and the bedrock of their ethos. Indeed, many Conservatives are anti-education; they believe that university faculty are a bunch of leftist radicals; they disdain science (such as climate change) because they perceive a political agenda behind everything in academia.

This means, however, that in a country like the US, where obtaining a post-secondary degree is incredibly difficult and expensive, the Conservative ethos is more largely reflected in the population. More people are proud of having started with nothing, and they do not crow about the advanced degrees they have received but rather the standard of living they have achieved. The Liberal class, however, are much more prone to viewing themselves and others through the prism of elitism: did you go to the best schools? Did you intern at the right firm? Do you know the right people? Whose protégé are you? We see it all the time. Just look at the Clinton family. Or the Podesta family. Or the Cuomo family. And now, the Obama family.

These are the apparatchiks that run the government, and they believe that by virtue of their advanced education, superior intellect, savoir-faire and well-placed connections, they are entitled to run the government. They know best. The average American must be led, must be managed, must be herded or driven to make the “right” decision.

The 2016 election put all of this in focus. Hillary and her campaign never knew what hit them. They could not conceive of losing to Donald Trump. And yet, if you listen to the rhetoric, both before and after the election, the major argument they ALL made for Hillary was: “she’s the most qualified.” Indeed, Obama even went so far as to say that Hillary was “the most qualified person ever” to seek the Presidency.

This is obvious bullshit, and easily disproven, but it echoed what the Democratic Establishment, aka the Liberal Elite, really believed: that Hillary did not need to have a reason to run, nor a burning desire to achieve change or transform America in any way; she did not have to “feel the pain” of the working class or anyone else. Her sole reason for running was to crown off her own personal career, to reach the pinnacle, to achieve the highest office in the land, and one for which she had been preparing for 30 years. In short, it was all about Hillary and her personal story, her quest to break that “highest glass ceiling.”

Hence the slogan: “I’m with HER” — a creepy, cultish-sounding phrase that anyone outside the elitist bubble would recognise as out of touch and alienating to a huge section of the electorate.

We know now from the tell-all book, “Shattered” that the Clinton campaign staff were at a total loss to come up with a reason WHY Hillary was running. They bounced around from one bad slogan to the other, and they even played with the idea of “It’s Her Turn” — which, in retrospect, would have been the most truthful.

So yes, there is a Liberal Elite that considers itself entitled to run the country simply because of their own pedigree. That is why the DNC always pushes so-called “Identity Politics.” The Democratic Elite believe in their heart of hearts that they deserve to rule simply and solely because of who they are: they have prepared for their role in government and they have a right to take it. It belongs to them by virtue of their bloodline and/or their curriculum vitae. The voters are, in the end, just a bothersome side show that they need to deal with every 2 or 4 years. Elections for them are a sham, because they really, TRULY believe that government is too important to leave up to the citizens.

That is why Donald Trump was anathema to them. That is why Bernie Sanders is anathema to them. Indeed, the point has been often made that the Democratic Party elite would much prefer to have a Republican — even Trump — win the White House than to have a progressive like Bernie Sanders come in and disrupt the elitist system of patronage and donor-driven corruption that currently defines DC. Firstly, you should know that Bernie enjoys an 80% approval rating among Democrats, and a 57–61% approval rating overall, depending on which poll you read.
Secondly, you should know that Hillary Clinton has only a 35% popularity rating, and what’s worse is that if the election were held today, 15% of Hillary voters say they would vote for someone else OTHER than Hillary.

You probably know that the Democratic Party has been decimated in the past 8 years, losing some 900 legislative seats, 2/3 of all governorships, and of course the House and the Senate, as well as the White House.

And yet, many Democrats seem to think the problem is Bernie Sanders, who came on the scene just 20 months ago.

The Democrats have a problem with Bernie Sanders because Bernie represents what people want, and the Democrats do not. And they want to keep on NOT giving the people what they want, and Bernie is getting in the way.

Healthcare: A Case in Point

The Democrats have built a brand over the past 30 years that is based on being just somewhat less shitty than the GOP. They stopped representing working people and the middle class and instead they represent the effete elitist Liberal class.

Hillary Clinton is worth $153 million and had no real reason to run except that she had been preparing to run for entire adult life. It’s the same with all the Democratic establishment. The only thing they have going for them is their own elitist positions, their own connections, their own hubris, and above all, their own wealth:

– Claire McCaskill is worth $20 Million and has a private jet

Aside from the fact that they all have private jets, these “Democrats” have one other thing in common: all three of the above have publicly and repeatedly come out AGAINST a “Medicare for All” single payer health care system.

I mean, Charles Krauthammer and George Will, both stalwart Conservative icons, have come out to say that single payer is inevitable. Even the CEO of Aetna, the insurance behemoth, has said that the for-profit system is on its way out.

And yet, these “liberal” political leaders are against it. So — instead of trying to woo up-scale “suburban” Republicans who are down with abortion and gay rights, why don’t the Democrats go after those low-income Republicans for whom single payer healthcare is literally a matter of life and death?

I will tell you why:

It is because the Democratic Party is a cesspool of corruption, awash in dirty donor money and run by a cabal of elitist a-holes who really don’t give a sh*t about anyone who didn’t graduate from the right school or intern with the right person; who cannot see beyond the beltway and whose feelings for the rabble who live beyond the confines of DC range from careless disregard to open disgust (“deplorables”).

The Democratic Party must either be transformed or destroyed. Bernie represents both of those options, and that is why he is attacked and disparaged by the Media and the Democratic establishment. The Republicans and the Democrats have a tacit agreement between them that wild-eyed populists like Bernie and their “plebian” followers must be kept far away from the halls of power. The DNC was able to squash Bernie; the RNC was not able to squash Trump. And that fact alone tells us that when it comes to elitism and the power of an entrenched political and bureaucratic “ruling class”, the Liberals are the ones in charge.

That situation still obtains, and the people know it. Getting rid of Donald Trump will not put that genie back in the bottle.