Posted on Saturday, 26 January, 2019 by Euroyankee 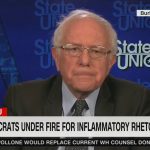 These narratives are coming from the #NeverBernie media outlets, and they are designed to sound like “sensible” arguments against a Sanders candidacy. And they, too, must be debunked. There are several narratives being pushed by the media in order to discourage and/or derail a Sanders campaign for President. These narratives are not to be confused with the Troll Smears that are all over social media, and which I have previously debunked in a separate post.

Narrative Nr. 1: “Sanders will divide the Democratic party like he did in 2016”

This is a cynical and anti-democratic (small d) statement if ever there was one. And in a free society the Press should be the last institution to be calling for less democracy. This idea that there should be fewer candidates, fewer alternatives, fewer choices and fewer voices in our body politic is repressive.

Moreover, IT IS NOT TRUE. Fully 88% of Sanders’s supporters voted for Hillary Clinton in 2016. This is historically high, especially when you consider that in 2008 fully 1 in 4 Clinton supporters refused to vote for Obama. Yes, that’s right, 25% of Clinton supporters defected and voted for McCain in 2008. And yet in 2016 NO ONE ever suggested that another Hillary run would “divide the party.” Such an accusation is not just anti-democratic, cynical and disingenuous – it is pure hogwash.

Secondly, 2016 was an anomaly because it was all supposed to be about the coronation of Queen Hillary, and many articles have described how the DNC, the Democratic Elites and the Obama Administration worked to “clear the field” for Hillary to run, dissuading even VP Joe Biden from giving Hillary some competition. It was therefore an unusual situation that there was any competition at all. I am sure that Obama and the DNC never expected Bernie to last past 2015. The fact that he did has pissed off these elites to no end.

But regardless of how you see the 2016 race, you cannot possibly compare it to the 2020 field, which is anything BUT cleared. Currently there are about 30 potential candidates contemplating a run – including the aforementioned Joe Biden. How then can one candidate (Bernie) possibly be accused of “splitting” the Party? This argument makes no sense unless you have an ulterior motive for keeping Bernie out of the race.

And let’s be real: there is no real “split” in the Democratic Party when it comes to Bernie Sanders. Poll after poll shows that between 9 out of 10 Democrats have a favorable view of Bernie Sanders.

CNN/ORC Poll from 31 May 2017 shows the same thing as the Harris poll.

So what we are really talking about when we discuss the “split” in the Democratic party is 92% on one side who like Bernie Sanders, and the #Hateful8percent on the other side who hate him with a burning passion.

And, unfortunately for us, that 8% cohort are in very powerful positions within the Democratic Establishment and the Corporate media. So be on the lookout for this #Neverbernie Narrative and don’t let them get away with it!

Narrative Nr. 2: “Bernie’s message is now old news; his policies are mainstream and better carried by others”

This false narrative is perhaps the most openly contradictory and downright stupid reason of all. These media outlets would have us believe that, now that Bernie is no longer a fringe candidate with 3% name recognition but rather has been sitting atop the polls as the most popular politician in America; now that he has transformed the national debate in terms of healthcare, college tuition and student debt, now that he has publicly and dramatically taken on Goliaths like Disney, Amazon and Walmart and forced them to pay their workers a decent wage; now that he has several Town Halls, Public Debates and other major national events under his belt, he should really just step down, pull back and let some lesser known candidate run on his ideas. Such an argument is ridiculous on its face and really needs no further rebuttal.

Narrative Nr. 3: “Bernie responded poorly to the accusations of sexism in his 2016 campaign”

This one is probably the weakest argument because it is also one that is made up out of Media whispers and gossamer, with no basis in fact. The letter submitted by Sanders staffers that launched this whole discussion never suggested that Bernie knew what was going on, nor did it accuse Bernie of not responding appropriately. The letter was simply a request for a meeting with the aim to address and mitigate any such similar problems should the Senator decide to run again in 2020. There was no mention of his having “responded poorly” in 2016. There were no insinuations of guilt on the part of Sanders at all. It was simply a pro-active request to get the issue out in front, ahead of a possible 2020 campaign formation.

By contrast, you have had very damning accusations against the Hillary Clinton 2008 campaign regarding Burns Strider, whom Hillary personally shielded and promoted even while knowing of his sexual misconduct. Yet, no one ever suggested this was a reason for Hillary not to run in 2016, and not to run on – of all things – a woman-centric platform.

Also by contrast, Kamala Harris recently accepted the resignation of a top staffer who had been sued for $400,000 over sexual harassment. The harassment took place in 2016, the settlement was in May 2017, but the story did not come out until December 2018, at which time the staffer resigned. Harris claims she knew nothing about the harassment or the settlement, despite the aide being described as one of her closest confidantes. This truly beggars belief. And yet – hardly a peep from the Media, very little coverage at all – and this all coming from a woman who made it her first priority in the Senate to push for Al Franken’s resignation.

This is not “whataboutism”; this is pointing out a very pronounced and muscular bias and a deep-seated, visceral prejudice against Bernie Sanders which has resulted in vastly different and unfair forms of treatment being heaped on him and not on his would-be opponents. Surely those in the #MeToo movement can sympathize with such a situation.

Narrative Nr. 4: “Sanders has chosen his own Presidential ambitions over the needs of Vermonters”

Tell that to the people of Vermont. who reelected Bernie with 66% of the vote. Indeed, Bernie continues to be the most popular Senator in the country.

The #NeverBernie Media is led by the New York Times and Washington Post, the main guardians of the power elite and the status quo. For these two institutions, a Bernie Sanders nomination would be an absolute disaster, a world-ending event, and so it is to be avoided at all costs.

I have already made several serious bets that, should Bernie Sanders win the Democratic nomination, the New York Times will endorse his opponent – even if it is Trump – or else the paper will for the first time refuse to make an endorsement. I mean, can ANYONE seriously imagine the Editorial Boards of the NY Times or Washington Post actually writing an endorsement of Bernie Sanders? I mean, REALLY?