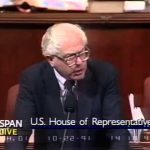 Bernie speaking against a Crime Bill in 1991

This is also a very cynical and misleading smear that needs to be explained and debunked just as much as any other.

The 1994 Crime Bill was an unmitigated disaster for POC and the poor. It led directly to the mass incarceration problem that we have today, and it started the whole for-profit prison boom. It enshrined the dreaded “three strikes” sentencing guidelines into US law and treated POC unfairly in terms of punishment.

Hillary Clinton was a huge proponent of this despicable legislation. And once it was passed, she continued to sing ts praises and its effectiveness at “bringing super predators to heel”.

Joe Biden was even worse

If anyone should be “held accountable for his actions” (as the BlackLivesMatter protesters shout) then it is Joe Biden, not Bernie Sanders. Biden was an ardent and vocal supporter of Bill Clinton’s welfare “reform” and “tough on crime” bills that devastated black families and led to the mass incarceration of black youths.

“We have predators on our streets that society has in fact, in part because of its neglect, created…they are beyond the pale many of those people, beyond the pale. And it’s a sad commentary on society. We have no choice but to take them out of society….a cadre of young people, tens of thousands of them, born out of wedlock, without parents, without supervision, without any structure, without any conscience developing because they literally … because they literally have not been socialized ….we should focus on them now….if we don’t, they will, or a portion of them, will become the predators 15 years from now.”

Bernie opposed much of what was in the 1994 Crime Bill. He only voted for the bill because it contained within it the much needed Violence Against Women Act (VAWA). Any Senator or Congressman who voted against the so-called “Omnibus” Clinton Crime Bill would have been subject to attack as being anti-woman or at least insensitive to women‘s issues.

Indeed, it is widely believed that the Clinton Administration deliberately included the VAWA and the AWB in the omnibus bill in order to force progressives like Bernie to vote for the legislation.

Still, Bernie took to the floor to decry the Crime Bill’s harsh provisions regarding punishment and imprisonment:

“We already imprison more people per capita than any other country, and all of the executions in the world, will not make that situation right. We can either educate or electrocute. We can create meaningful jobs, rebuilding our society, or we can build more jails. Mr. Speaker, let us create a society of hope and compassion, not one of hate and vengeance.”

If you encounter this smear, you may wish to respond by cutting and pasting the video below, which provides a good comparison of how Bernie Sanders and Joe Biden each viewed that bill at the time.