Posted on Thursday, 9 January, 2020 by Euroyankee 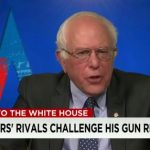 First, let’s be clear: Bernie is no fan of the NRA. Moreover, Bernie is by no means the most pro-gun Democrat out there. Indeed, throughout most of his career, Bernie has had a solid “F” from the NRA.

In addition, Bernie has been endorsed by the March For Our Lives anti-gun violence group that was formed in the wake of the Parkland shootings.

Still — the anti-Bernie crowd prattle on so let’s take the charges one buy one:

This is a particularly cynical attack that was hatched by the Clinton campaign in 2015. It is the quintessential political smear in that it takes votes out of context and makes it appear that Bernie opposed the provisions of the Brady Bill on principle or as a matter of conscience. This is not the case.

Bernie won his first term in Congress in 1990 by promising to oppose mandatory waiting periods. It was part of his platform, and he ran on that pledge; it was a promise he made to his constituents, 35% of which said that the waiting period issue was a “major reason” for voting for Bernie.

As Jeff Weaver explained to PolitiFact:

“He wasn’t opposed to states having (waiting periods) if they wanted to. The Republicans wanted to repeal waiting periods in states that had them, and Bernie voted that down,” Weaver said. “He said he would be against waiting periods, and he kept his word to the people of Vermont.”

The Brady Bill would have mandated a federal background check and a federally mandated waiting period for people buying handguns. The waiting period was vehemently opposed by the people of Vermont, a state which has NO gun control at all, and whose citizens (and voters) oppose gun control measures as a matter of dogma.

Many say that Sanders has a “mixed” record on gun control, but in reality, his record as a Congressman and a Senator is 100% consistent with those of his constituents. Bernie is known for his integrity, and part of that integrity is to vote the way the people who elected him want him to.

Despite opposing the federal mandate for waiting periods, Bernie opposed Republicans trying to force states that did have waiting periods to repeal them. Moreover, he has always supported background checks (the other part of the Brady Bill), and he voted for the Assault Weapon Ban.

“To ensure that law abiding Amtrak passengers are allowed to securely transport firearms in their checked baggage.”

That’s right: so people can carry their guns in CHECKED BAGGAGE only.

All this bill did was give Amtrak passengers the exact same rights to travel with firearms that airline passengers already had under TSA guidelines §1540.111.

This refers to Bernie’s support for the 2005 Protection of Lawful Commerce in Arms Act (PLCAA), which protects gun manufacturers and sellers from lawsuits that hold them liable for dealing in firearms that end up in criminal hands.

This is a philosophical vote that Bernie has explained often, and it is a vote he stood by until recently. He used to defend his vote as follows, from his conversation on Meet the Press:

“If you were a gun shop owner in Vermont, and you sell somebody a gun, and that person flips out and then kills somebody, I don’t think it’s really fair to hold the [gun shop owner] responsible. … On the other hand, where there is a problem is there is evidence that gun manufacturers do know that they’re selling a whole lot of guns in an area that really should not be buying that many guns — that many of those guns are going to other areas, probably for criminal purposes. So can we take another look at that liability issue? Yes.”

So Bernie was always willing to revisit the liability issue. But since then, Bernie has gone from wanting to tweak the PLCAA to actually wanting to repeal it altogether.

Indeed, when Democrats introduced a bill in January 2016 to repeal the PLCAA, Bernie supported it.

So, yes, Bernie has “evolved” on this particular issue, and has been in favour of repealing immunity for gun manufacturers since at least January 2016.

“Bernie is supported by the NRA, owes his career to the NRA, etc.”

Indeed, it was his full-throated support for the Assault Weapon Ban that earned him the ire of the NRA, who then poured money into his opponent’s 1994 campaign to unseat him, popularizing the bumper sticker slogan “Bye Bye Bernie”.

As mentioned above, throughout most of his career Bernie has had a solid “F” from the NRA. His grade rose slightly when he did not vote to repeal the PLCAA, but that will now change as Bernie joins Democrats to repeal those protections for gun manufacturers.

Here is a great video that explains Bernie’s views on gun control.