Anti-Bernie Smear #4: “Bernie was not an effective legislator and he never accomplished anything in Congress” 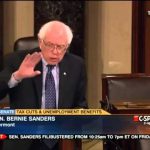 In fact, nothing could be further from the truth. As explained in this article in AlterNet, and even confirmed here in PolitFact, Bernie was known as the “Amendment King” in Congress.

This is important, because actual bills passed in the US Congress are NOT progressive themselves.

People who do not understand how Congress works may tend to downplay the importance of Amendments. This is wrong. Just ask any abortion rights activist what they think about The Hyde Amendment.

Moreover, what the AlterNet article makes clear is that Sanders managed to pass very progressive Amendments that helped working families and the poor, and he did so in a Republican controlled Congress.

This last fact is also important, because one of the biggest attack lines against Bernie is that he cannot work “across the aisle” to garner GOP support for his issues. As both the AlterNet and PolitiFact articles point out, Bernie was extremely effective at rallying bipartisan support for progressive legislation.

Sanders did something particularly original, which was that he passed amendments that were exclusively progressive, advancing goals such as reducing poverty and helping the environment, and he was able to get bipartisan coalitions of Republicans who wanted to shrink government or hold it accountable and progressives who wanted to use it to empower Americans.

Here is a partial list put together by Warren Gunnels, who has been on Bernie’s staff for decades. 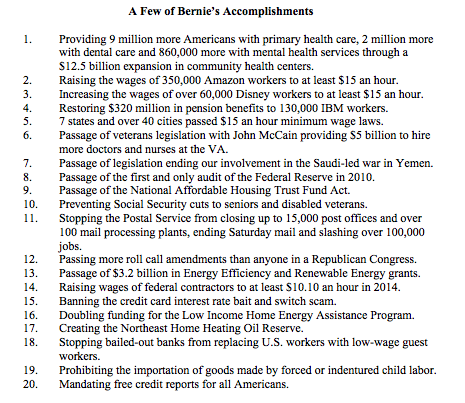 Also – If someone presses you for a concrete example of actual bills passed, feel free to point them to this page on Bernie’s website:

There you will see some concrete examples such as this one:

There are several others to be found on that web site.

Another good example is this one, which was taken from a town hall in West Virginia, and shows Bernie’s popularity in “Trump Country”:

“I’d never dreamed I’d get a chance to thank you personally for the bill that you cosponsored,” a retired coal miner told Sanders on Monday during a televised town hall event hosted by MSNBC’s Chris Hayes.

The coal miner was referencing the Miners Protection Act, a bill introduced by Sanders, West Virginia Sen. Joe Manchin and 24 other lawmakers from both parties. The bill would shore up health benefits for over 12,000 retired mine workers whose benefits are set to run out at the end of April. It would also help save their flagging pension plans.

And here is first person testimony from Robert Reich: 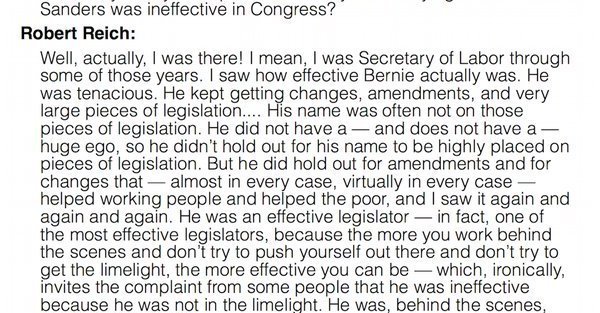 The Origin of this Smear

So where does this “holier-than-thou” smear come from? Well, let’s take a closer look at Barney Frank, the powerful Chair of the House Banking Committee, who was instrumental in designing the Dodd-Frank financial regulations bill that bears his name. He is also one of the most vocal proponents of the “Bernie was isolated and ineffective” smear campaign.

Here is a 2012 quote from Barney Frank that you will NOT find in an article in which he attacks Bernie for insisting on so-called “purity”:

“People say, ‘Oh, it doesn’t have any effect on me,’” [Frank] says. “Well if that were the case, we’d be the only human beings in the history of the world who on a regular basis took significant amounts of money from perfect strangers and made sure that it had no effect on our behavior.” — Barney Frank to NPR

Immediately upon retirement from Congress, Barney Frank was given a cushy job on the Board of Directors of a $24 billion Wall Street Bank. This seems strange, when we are always told how strict and “tough” Dodd-Frank supposedly was on the banks, and what a great piece of “progressive” legislation it was.

In reality, Dodd-Frank was a watered-down bill that did nothing to reduce the size of the banks or keep them from posing a renewed danger to the world economy. Passing such faux-reforms is what gets a Congressman a seat on a Board of Directors once they leave what they cynically refer to as “public service.”

Suffice it to say, when people like Barney Frank criticize Bernie Sanders for being “holier-than-thou” about money in politics, there is a very good reason for them to do so.

Anti-Bernie Smear #4-A: “Bernie only passed Amendments and no real bills”

This is a follow on or come-back smear that ignores the oligarchic reality of Congress and the bills that are passed there.

First, someone who makes this argument has little knowledge of (1) how Congress works, and (2) for whom it works.

First, let’s look at how congress actually works, and what kinds of bills are passed. A recent Princeton study found that the political priorities and goals of ordinary Americans have NO impact on what Congress does, and what bills they pass.

Princeton Study Confirms ‘US Is An Oligarchy’
“…policymaking is dominated by powerful business organizations and a small number of affluent Americans, then…www.zerohedge.com

The only direct correlation they found was that the ruling elite regularly had their policy priorities reflected in legislation, and that the extent to which those preferences were reflected in laws was directly proportional to how rich they were.

What does this mean?

This means that the bills that get passed through Congress are designed to benefit the very wealthy and the Corporations. They are NOT written to benefit average citizens.

So anyone who is “successful” at getting bills through Congress should immediately be suspect. Because the Princeton and other studies prove that such “success” is only in doing the bidding of wealthy donors and the Corporate Elite. Unlike Bernie Sanders, they are NOT doing what will help the 99% of Americans.

How does Bernie do it?

Bernie has been called the Amendment King because he is very adept at writing progressive legislation that actually helps working people, and then tacking that legislation onto a bill as it goes through Congress.

Bernie Sanders was the roll call amendment king from 1995 to 2007
Bernie Sanders is often criticized for “pie-in-the-sky” proposals and impractical ideals, but his campaign argues the…www.politifact.com

Out of 419 amendments Sanders sponsored over his 25 years in Congress, 90 passed, 21 of them by roll call votes. Here’s a breakdown (bold indicates Republican Congresses):

Alternet also published a piece that analyzed Bernie’s success in getting things accomplished for working people amid the bills passed to benefit the top 1%.

Bernie Gets It Done: Sanders’ Record of Pushing Through Major Reforms Will Surprise You
What kind of experience does Bernie Sanders have? Let’s take a look. “I’m a progressive, but I’m a progressive who…www.alternet.org

From the above article:

Amendments in the House of Representatives are often seen as secondary vehicles to legislation that individual members sponsor, but they are an important way to move resources and build bipartisan coalitions to change the direction of the law. Despite the fact that the most right-wing Republicans in a generation controlled the House of Representatives between 1994 and 2006, the member who passed the most amendments during that time was not a right-winger like Bob Barr or John Boehner. The amendment king was, instead, Bernie Sanders.

So there you have it.