Why I Know Trump Did Not Collude with Russia

Everyone knows Trump is corrupt, that he does dirty deals, and that he had been trying to do business in Russia since the 1990’s. I am sure he also got financing from Russians.

But none of that means that he colluded with the Russians to win the Presidency.

Certainly his Russian creditors did not want him to win, and I don’t believe Trump himself wanted to win – for the very reasons we are seeing now. All his dirty business dealings are coming to light.

Trump just wants to make money any which way he can, and we know from Michael Cohen’s testimony that he enjoys cheating people in order to do it. Being POTUS cramps his style. That is why he constantly tweets NO COLLUSION! Trump knows he is corrupt, he knows all the dirt that the Democrats will dig up on him, all the crimes they could charge him with, but he also knows that collusion is not one of them.

Now, I could go into detail about how the RussiaGate story was all just a hoax created by Obama’s CIA chief, John Brennan, to deflect blame and attention away from Hillary and the Democratic Party when they were revealed to have perpetrated the greatest election fraud in US history.

I could also go into detail about how the #RussiaGate narrative was then “re-purposed” by Clinton campaign staffers Robby Mook and John Podesta to again deflect blame and attention from their own dismal failure, the incompetence of the campaign and the unpopularity of the candidate.

But we don’t need to get bogged down in all of that, because the simple fact – and one that Michael Moore mentions in his film “11/9″ – is that Trump never wanted to win and he never expected to win. His candidacy was just one giant publicity stunt to prove to NBC that he was more popular than Gwen Stefani.

Trump is not very bright, but he is certainly smart enough to know that he has tons of skeletons in his closet, any one of which could put him in jail if investigated thoroughly.

He is also smart enough to know that he could never count on a “friendly” GOP controlling both Chambers of Congress forever, and that he would be investigated as soon as he took office.

Still, the #RussiaGate hoax has been effective. It has turned otherwise thoughtful and fact-loving Liberals into ignorant hooting hogs like their counterparts on the Right.

For example, although half of Republicans think that 3 million “illegals” voted in 2016, a strong majority of Democrats actually believe that Russia changed the vote tallies in the 2016 election.

Moreover, after #RussiaGate has been promulgated in the mainstream media, MORE Democrats believe this patent falsehood than did at the end of 2016. 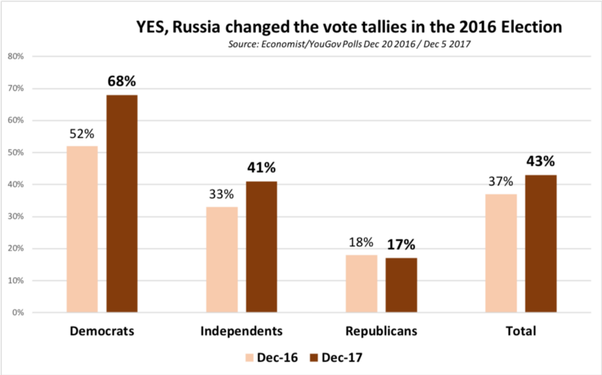 Note: this post first appeared as an answer on Quora.

EuroYankee is a dual citizen, US-EU. He travels around Europe, writing on politics, culture and such. He pays his US taxes so he gets to weigh in on what is happening in the States.
View all posts by Euroyankee →
This entry was posted in 2016 Campaign, Politics and tagged #Collusion, #RussiaGate, #Trump. Bookmark the permalink.