Anti-Bernie Smear #21: “Bernie wants to take away Americans’ CHOICE in their healthcare provider” 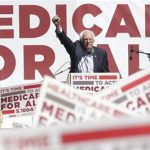 This is an insidious accusation that hinges on debunked ideas of “socialized medicine” and uses classic neoliberal attack strategies to promote what is essentially a massive and bold-faced LIE. Reagan opposed Medicare and even published a record about it.

First, let’s look at the Ronald Reagan’s original attack on Medicare when it was first introduced in the 60’s. He claimed it was “socialized medicine” and was thus “anti-American” and so on. This line of attack against Medicare For All is easily debunked, however, by simply pointing out that Medicare is now one of the most popular programs in the US and consistently polls at the top in terms of customer satisfaction – far above any for-profit private insurance provider. In addition, Medicare and Medicaid are both far more cost efficient than private insurance.

But what about “CHOICE”?

Knowing that they cannot attack M4A in terms of cost-effectiveness, customer satisfaction or any other tangible metric, opponents to Medicare For All have resorted to arguing about that illusive and subjective issue of CHOICE.

Firstly, as progressives we must always – and I mean ALWAYS – be on guard about ANY conservative or centrist argument that uses the word “choice.” These types of attacks utilize the talking points and the philosophical underpinnings of neoliberalism as set forth in Milton Friedman‘s seminal book, Free to Choose, which sought to portray neoliberal capitalism as the perfect system because it offered “choice” to the Consumer. Friedman was Reagan’s favorite economist and indeed, his neoliberal principles informed and guided many of the anti-government, pro-market policies that defined “Reaganomics”.

Free to Choose was even made into a TV series that aired in 1980 (coincidentally enough) and was aimed at bringing the principles of free-market capitalism to the broader public. Primary among these was the premise that only Capitalism could bring freedom to human society. These neoliberal ideals were encapsulated into bite sized themes and slogans such as “consumer choice”. The idea that “choice” is not only the most important aspect of economic freedom, but that choice itself can only be delivered through free-market capitalism, is a central tenet of neoliberalism. These are the very policies and principles that Bernie’s Political Revolution is seeking to overthrow.

Upside down and backward: the Big Lie of “Healthcare Choice”

Whenever anyone starts claiming that the private for-profit health insurance market provides “choice” to consumers, they are LYING. There simply is no other way to put it. The narrative about choice in terms of health insurance is the very heart of the industry’s propaganda. It is The Big Lie in the classic sense in that it is the very opposite of the truth.

Wendell Potter is a former head of corporate communications for Cigna, who left the insurance industry to blow the whistle on just how much that industry is lying to us.He knows they are lying, because as an insurance industry PR flack he created the lie in the first place.

When I worked in the insurance industry, we were instructed to talk about “choice,” based on focus groups and people like Frank Luntz (who wrote the book on how the GOP should communicate with Americans). I used it all the time as an industry flack.

As a health insurance PR guy, we knew one of the huge “vulnerabilities” of the current system was LACK of choice. In the current system, you can’t pick your own doc, specialist, or hospital without huge “out of network” bills. So we set out to muddy the issue of “choice.”

He explains that the insurance companies are actually working to limit choice through something called “Benefit Buydown“:

…whether it’s moving people into high deductible plans, making them pay a lot more for care out of their own pockets before their coverage kicks in, limiting their choice of access to doctors and hospitals, having someone at an insurance company decide whether or not you’re eligible for a procedure your doctor says you need. All these things have been going on for several years and they make health insurance much less valuable than it used to be.

Moreover, as Bernie has pointed out, employers can change insurance providers at will; and by “shopping around” to reduce their employee healthcare costs, employers can institute higher co-pays and deductibles,or choose a plan in which very little is “in network”, forcing employees to pay extra for “out of network” services. Potter continues:

Another aspect of private insurance companies that’s become prevalent is to very much restrict which doctors and hospitals you can go to through these so-called limited or skinny networks. So people in private plans have less choice, but they’re paying more for it and having to jump through hoops to get their bills paid.

Many people argue that Americans who are in unions want to keep their “Cadillac” health care plans. This is not the case for anyone who has witnessed what has been going on in the healthcare industry and in those unionized employer plans. But, as Wendell Potter explains:

Even in most union plans these days, the participants are increasingly facing higher deductibles. They’re having to pay more out of their own pockets before their coverage kicks in. They’re not immune to that. Increasingly, the networks of providers are more and more limited.

This year, you might have the doctor that you prefer to use, next year you might not. It’s out of your hands and you probably didn’t have a choice of insurance carrier. That was made for you. So this notion that even people who have union plans have a choice of health insurers, it’s not true, because those decisions were made by somebody else and typically, you’re never asked. Currently over 93% of all doctors in the US accept Medicare. Likewise, virtually every hospital in the US accepts Medicare patients, the only exceptions being those facilities run by the Veterans Administration or the US Military, the Indian Health Services or specialized private facilities such as Shriners’ Hospital for Crippled Children.

Once Medicare For All is implemented, we will see the percentage of participating doctors go even higher, to the point where basically every doctor in the US will be “in network”. This will give Americans true “choice” when it comes to choosing a doctor or a hospital.

The People Know the Truth

Perhaps the worst part of the Big Lie about health insurance choice is that it is so insulting to the American people – those who have seen their co-payments and deductibles increase, their coverage decrease, their networks shrink. Those people who have had to do battle with insurance providers to try to get procedures covered or benefits paid.

These people realize that our healthcare system is broken and we need to fix it. As Bernie himself expressed it on MSNBC, people do not love their health insurance companies.

He even went a little further at a recent Q&A at LULAC:

Bernie proved this at a Town Hall on, of all places, FOX News, where a massive majority of the people in attendance said they would be willing to give up their employer-sponsored healthcare for Medicare For All.

If Bernie can rally a clear majority of FOX News viewers on Medicare For All, then it’s game-set-match. Anyone who is still droning on about “choice” (Mayor Pete, Joe Biden) is simply being disingenuous, or “misrepresenting” as Nancy Pelosi says.

But I’ll just call it what I did at the top of this piece: LYING.

EuroYankee is a dual citizen, US-EU. He travels around Europe, writing on politics, culture and such. He pays his US taxes so he gets to weigh in on what is happening in the States.
View all posts by Euroyankee →
This entry was posted in 2020 Campaign, Anti-Bernie Smears, Anti-Progressive Smears, Bernie Sanders, Economics, Politics. Bookmark the permalink.

1 Response to Anti-Bernie Smear #21: “Bernie wants to take away Americans’ CHOICE in their healthcare provider”