Anti-Bernie Smear #22: “Bernie is an Anti-Semite” 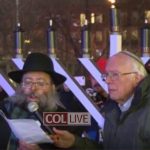 To many people this may seem like an unlikely or even a silly smear, given that Bernie is Jewish, given that he lost his family in the Holocaust, and given that he actually lived and worked on a Kibbutz in Israel. But believe me, this is a serious smear, and the fact that serious people will level this kind of attack says more about the state of discourse surrounding Israel, Judaism and the definition of Antisemitism than it does about Bernie Sanders.

The “Modern” Definition of Antisemitism

Before we can debunk this vilest of smears, we need to understand where it is coming from. The attacks of Antisemitism against Bernie are similar to the smear campaign waged against Jeremy Corbyn and the Labour Party in the UK. In both cases, the attacks are meant to serve purely political goals and have nothing whatsoever to do with the very real problem of rising Antisemitism and other forms of racism around the world.

And if you doubt this to be the case, just ask yourself why the “rampant” Antisemitism that was “raging” inside the UK seems to have completely disappeared since Corbyn lost the election.

Still, these smears of Antisemitism against Bernie should not surprise us. They were foretold by Prof. Norman Finkelstein way back in 2018.

It started in the UK

One of the primary driving forces behind the Antisemitism smear campaign against Bernie is a group called “Democrats Against Anti-Semitism” – a well organized, well-funded group whose primary if not sole aim is to attack Bernie Sanders. This group seems to be funded by the same people who launched “Labour Against Antisemitism” in order to attack Jeremy Corbyn.

Labour Against Antisemitism was launched in Feb-March 2017, just 2 months before the launch of the UK General Election in which Jeremy Corbyn stood to lead the Labour Party to its greatest electoral success since WWII. The group really kicked into high gear after that election, and the smear campaign of Antisemitism played a major role in reversing that 2017 Labour victory and turning it into a massive defeat for Jeremy Corbyn in the election of December 2019.

Did the Labour Party, one of the oldest and largest political parties in the world, NOT have an Antisemitism problem for the first 118 years of its existence? What made Labour Against Antisemitism spring into existence with a wealth of funding behind them, just in time to block the socialist agenda of Jeremy Corbyn?

It has spread to the US

Similarly, Democrats Against Anti-Semitism launched in December, 2019. Again, one must ask: did the Democrats not have an “Anti-Semitism” problem for the first 190 years of their existence? Indeed, did the Anti-Semitism in the Democratic Party only rear its ugly head once the Party seemed likely to nominate its first ever Jewish candidate for President?

How stupid do these people think we are?

The foreign dark money group attacking Sanders (which gave itself away not knowing American date customs) — https://t.co/MAl846KC5c — is now out with some extremely expensive research that doesn’t remotely prove the case Sanders is anti-Semitic.

Bernie is being accused of Antisemitism solely because of his comments in support of Palestinian rights and in condemnation Israeli war crimes and human rights violations in Gaza. This is NOT Antisemitism. Rather, Bernie is merely trying to uphold the rule of law by voicing support for respectable international organizations such as the United Nations, Amnesty International and Human Rights Watch.

Here is an example of the kind of “Anti-Semitic” remarks for which Bernie is being criticized:

Over 50 killed in Gaza today and 2,000 wounded, on top of the 41 killed and more than 9,000 wounded over the past weeks. This is a staggering toll. Hamas violence does not justify Israel firing on unarmed protesters.

The above tweet is very mild, and yet such reasonable and obviously justified observations immediately trigger an attack claiming Antisemitism.

Still, while Bernie is often criticized for “not being a real Democrat”,  at least when it comes to Israel he is closer than most to one of the most revered Democrats in history, President Jimmy Carter.

The quick response to this smear, if it is being leveled by a centrist Democrat, is to first reference the facts above, namely that these smears are being generated by a foreign group that was formed with the express intent to stop Bernie from becoming the first Jewish President, and ask the smearer why they are siding with foreigners who are meddling in our elections.

Secondly, you can point out that even Jimmy Carter, who brokered the only peace treaty in history between Arabs and Jews, has, like Bernie, also condemned what Israel is doing in Palestine. Inform them that any Democrat who claims to be “resisting” Trump, who is pro-impeachment because they claim to care about “rule of law”, “international norms” and “human rights” should be joining Bernie in his criticism of the cruelty and the utter contempt for the law that the Israeli Prime Minister Netanyahu, a fervent and devoted friend and fan of Donald Trump, exhibits towards the Palestinians.

Indeed, Trump enjoys a 67% approval rating in Israel, whereas Obama only has a 19% approval rating.  So any Democrat who is attacking critics of Israel like Bernie Sanders needs to answer the question of why they are so supportive of Trump’s allies while being so tolerant of Obama’s enemies.

Pro-Israel Democrats who are attacking Bernie because he criticizes the Netanyahu regime for its treatment of Palestinians must also explain why they condemn Trump’s treatment of refugees at the US Southern Border but condone the indiscriminate murder of unarmed Palestinian refugees in Israel.

They must explain why it is OK for Israelis to imprison, mistreat and even shoot unarmed Muslim refugees, but not OK for Trump to mistreat and shoot unarmed Christian refugees. Are they themselves racist? Is it religious bigotry? Islamophobia? In any case, those Democrats attacking Bernie as an anti-Semite are acting like the very worst of Trump’s own supporters.

Democrats should follow the example of Jimmy Carter and refuse to ally themselves with Donald Trump and Netanyahu and their racist right wing governments. Jimmy Carter will forever go down in history as the first (and possibly only) US President to have actually brought “peace to the Middle East”. As a Baptist minister and a deeply devout Christian, Carter wanted to see peace brought to the Holy Land and struggled during his term in office to conclude the Camp David Accords between Israel and Egypt – leading to a landmark peace treaty that still holds to this day.

Carter has nonetheless described Israel today as a modern-day “Apartheid state” and his 2006 bestselling book, Palestine: Peace Not Apartheid describes the many injustices that have been visited on the Palestinians by their Israeli occupiers. In a March 2006 Op-Ed in The Guardian, Carter wrote:

The book describes the abominable oppression and persecution in the occupied Palestinian territories, with a rigid system of required passes and strict segregation between Palestine’s citizens and Jewish settlers in the West Bank. An enormous imprisonment wall is now under construction, snaking through what is left of Palestine, to encompass more and more land for Israeli settlers. In many ways, this is more oppressive than what black people lived under in South Africa during apartheid.

Carter goes on to lament the lack of perspective and compassion among US politicians:

It would be almost politically suicidal for members of Congress to espouse a balanced position between Israel and Palestine, to suggest that Israel comply with international law or to speak in defence of justice or human rights for Palestinians … This reluctance to criticise policies of the Israeli government is due to the extraordinary lobbying efforts of the American-Israel Political Action Committee and the absence of any significant contrary voices.

The last part of the above quote should embarrass and shame us all – it shows that back in 2006 none other than Jimmy Carter was stating the obvious facts for which Rep. Ilhan Omar would be so viciously condemned 12 years later. Worse yet, much of that criticism would come from fellow Democrats, including Nancy Pelosi and the rest of the House Leadership.

Attacks by Republicans – The Big Lie If the Antisemitism smear is coming from a Republican, then a different defense should be made

Like so many smears, GOP smears of Antisemitism are pursuing the old Goebbels strategy of accusing their opponents of that of which they themselves are guilty. Republicans, led by Trump, are pursuing an Israel strategy that is based on “Christian Zionism”, something that is fervently embraced by Mike Pence and Mike Pompeo, in which they blindly and fanatically support Israel in all things, believing that in so doing they will help fulfill the Prophecies of the rise of the of Israel and thus precipitate the Second Coming of Jesus Christ.

At which point, Jesus will wipe out all the Jews who have not yet converted to Christianity.

EuroYankee is a dual citizen, US-EU. He travels around Europe, writing on politics, culture and such. He pays his US taxes so he gets to weigh in on what is happening in the States.
View all posts by Euroyankee →
This entry was posted in 2020 Campaign, Anti-Bernie Smears, Anti-Progressive Smears, Bernie Sanders, History, Politics. Bookmark the permalink.