For the Many, Not the Few: How the UK Elections were a Proxy Battle for US Democrats 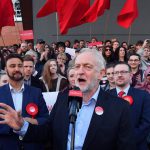 Some important take-aways from the 2017 UK election that you might not hear in the MSM.

Progressive Birds of a Feather

Firstly, we should consider that this was a proxy election for the US in many ways, in which the two sides of the Democratic Civil War were going at each other: Neoliberalism crosses party lines — as well as the Atlantic

Barack Obama openly supported Theresa May and the Conservatives. Indeed, May hired Jim Messina, Obama’s campaign strategist, to run her election campaign. My Democratic friends will recognise Jim Messina’s name from the countless fundraising emails you received from him during the 2012 election. I find it amazing that a Democratic President and a “Democratic” strategist would work to oppose what is clearly the Democratic analog in Britain (or should be). But that is just indicative of how far right the Democrats have gone. Erika Uyterhoeven, a former director in the Sanders campaign, who is now working with Momentum. Photograph: Alicia Canter for the Guardian

On the other side, a group of Bernie Sanders staffers went over to help Jeremy Corbyn and the Labour Party. Bernie himself was openly supporting Corbyn at every turn.
So — the neoliberals are banding together to fight the progressives on both sides of the pond. And I guess we can see how well each side did. The Conservatives (let’s call them the Clintonites) called a “snap” election with very little time to campaign; Labour had been excoriated by the mainstream media, and even so-called “liberal” media attacked Corbyn as “unrealistic”, “too far left” and so on. Rumours were spread that he would pull the UK out of NATO, disband the Army, He was smeared personally — especially by “left wing” media, as an attention-seeker, a prideful zealot, who would destroy the Labour Party and the “liberal” cause.

So — how did it turn out? Well, in the brief time that Corbyn actually was able to campaign and get some attention, he managed to close a 26–30 point gap down to only about 3–7 points, depending on the poll. And now we find that the Conservatives, who so pridefully and confidently called for the snap election (when they didn’t need to) made a huge miscalculation. They lost 11 seats in Parliament, whereas Labour gained 29. The Conservatives have lost their majority, and now we have a “hung” Parliament, wherein the Conservatives may or may not be able to cobble together a majority coalition. It could even happen that Labour are actually able to form a government by allying with the Scottish National Party, the Greens, etc. who share their same progressive anti-austerity policies.
More interesting: in the popular vote, it was 42% Conservative to 40% Labour. That’s damn close, and can only be seen as a huge victory for a Labour Party and a Leader who has been viciously attacked, denigrated and smeared not only by the opposing party, not only by the media, but also by members of his own Party!! This is where “liberalism” went wrong, with these grinning corporate sellouts.

It is just like in the US. The neoliberals would rather lose to conservatives than win with progressives.

Still — it is obvious that this was a vigorous rejection of the “third way” neoliberal paradigm. The 2017 Labour Manifesto is decidedly socialist, with calls to restore the railways to government control, massively increase public spending, and so on. And yet it was not until people actually read the Labour policy positions that Corbyn’s poll numbers really took off: The take-away from the UK General Election is that neoliberalism is DEAD. Tony Blair’s “New Labour” and Bill Clinton’s “New Democrats” have been roundly rejected, and it is time for the Left — on both sides of the Atlantic — to go back to what they are supposed to do — namely, stand up for working people, the poor, the young and the old.

Oh — and another observation, because it tickles my fancy: in a BBC interview after the election, Jeremy Corbyn proudly stated that the average donation that the Labour Party received was £22 — which, it just so happens, is equal to (say it with me) “twenty-seven dollahs.” 🙂

ADDED 14 JUNE: Amazing Interview with Claire Sandberg, one of the Bernie Staffers who went to the Uk to work on the Corbyn campaign

Claire spells out what we can learn from the UK elections as well as what made them different from US elections. She is simply awesome.

EuroYankee is a dual citizen, US-EU. He travels around Europe, writing on politics, culture and such. He pays his US taxes so he gets to weigh in on what is happening in the States.
View all posts by Euroyankee →
This entry was posted in 2020 Campaign, Anti-Bernie Smears, Anti-Progressive Smears, Bernie Sanders, Culture, Economics, Politics. Bookmark the permalink.