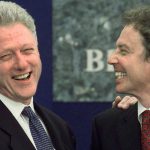 Neoliberalism is the idea that the Market is the Mother of all Things.

The tenets of Neoliberalism are as follows:

(1) “Market-based” solutions are the most stable and are inherently more sustainable than “top down” publicly funded programs that rely on the “arbitrary” redistribution of wealth and resources.

(2) The Market is the ultimate arbiter of an individual’s worth and it allocates resources to individuals and groups based on a “natural” and immutable process that should not be questioned, perverted or impeded by Government.

(3) Because the Market is an impartial and efficient distributor of resources, wealth and income inequality is actually a moral imperative and the people who accrue more resources deserve their wealth, while the “losers” who have not been able to thrive in the Market environment must simply accept their fate because there is no sustainable alternative to the Market-based system. (4) This means that wealthy, well-educated elites consider themselves to have achieved their status based solely on their own merit, and they are convinced that anyone else could do what they have done, if they just had enough ambition, drive, focus, etc. (i.e., “we can provide equal opportunity but not equal outcomes”).

(5) Having risen to the top of the meritocracy, however, these elites have a certain responsibility and must abide by a code that is an economic version of “noblesse oblige”. It falls to them to properly oversee the orderly, Market-driven operations of the Society (as Thomas Frank writes in his book, Listen, Liberal, this is a tenet of the current Democratic Party). 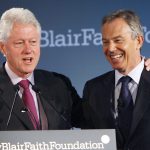 Bill Clinton and Tony Blair embodied the Neoliberal “Third Way” that took over the Left in the 90’s.

(6) The Market is self-correcting and, left alone, will always balance itself out (hence deregulation, dropping Glass-Steagall, etc.).

(7) Because the Market is infallible, privatisation is the only sustainable solution. “Public-Private Partnerships” are acceptable only as a transitional model with the goal of eventual full privatisation.

(8) Human beings do not have any rights simply because they are citizens of a country – indeed, any tangible benefits (healthcare, welfare, etc.) that an individual receives from the State must be earned and not simply granted as a right (hence “ending Welfare as we know it“).

(9) Globalisation represents the natural evolution of Market-based economies and, like Darwin’s theory, are accepted as fact by all reasonable and educated people. Like the irresistible “market forces” that drive an economy, globalisation is an inexorable and unstoppable process that can only be embraced, accepted and profited from (hence NAFTA, WTO, TPP). (10) Globalisation will eventually do for the world what the Market does in a State: it will allocate resources to the most deserving, and there will be winners and losers on a global level. Nation-States will lose their relevance and become insignificant as the Market grows to encompass all areas of human endeavour everywhere, with world-straddling mega-moguls and oligarchs exercising power over billions via a global Market system that has, in its wisdom, seen fit to position them atop the heap of humanity (i,e., “Rollerball”).

I will close this post with a quote from Margaret Thatcher, who was in many ways the Mother of Neoliberalism. Thatcher famously opined that “the trouble with socialism is that you eventually run out of other people’s money.” However, that quote needs to be put into context, because in order to have socialism you have to have a society. Indeed, the etymological aspect of the word “socialism” is predicated on the existence of an underlying society. Thatcher however did not believe in the concept of a society. So naturally the idea of socialism was completely alien and inaccessible to her.

The “Iron Lady” was the midwife of Neoliberalism.

Other posts in this series:

This is Neoliberalism, Part III: How We Build Empire

This is Neoliberalism, Part V: the false promise of “Choice”

EuroYankee is a dual citizen, US-EU. He travels around Europe, writing on politics, culture and such. He pays his US taxes so he gets to weigh in on what is happening in the States.
View all posts by Euroyankee →
This entry was posted in Culture, Economics, History, Neoliberalism, Politics. Bookmark the permalink.