This is Neoliberalism, Part III: How We Build Empire

Posted on Wednesday, 14 February, 2018 by Euroyankee 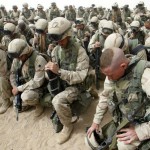 When your only chance at social and economic mobility lies in killing people or possibly being killed yourself. PFC Jessica Lynch, who joined the Army because she could not afford college.

Anyone who remembers the Iraq War of 2003 remembers Jessica Lynch, the first “American hero” of that conflict. Her convoy had been ambushed behind enemy lines and she was the last soldier alive in her unit, fighting heroically down to her “last bullet” — despite having been shot and stabbed. She was taken prisoner and later rescued by Special Forces in a daring raid.

At least, that was the story the Pentagon told. The truth was very, very different. Yes, Lynch had been injured, but only from the crash of her truck. She never fired a shot. She was taken to a hospital and treated very well.
Lynch never understood why the military had to make things up about her. She was no hero, she was just a girl from West Virginia whose dream was to teach kindergarten. Unfortunately for Jessica, her family did not have the money to afford to send her to college to get the degree necessary to become a teacher. The Army, with its tuition payment program, seemed the only way out.

[Jessica’s brother] did his first year on scholarship and was trying to work, but he didn’t have the money for his second year. But when the Army recruiter came from Parkersburg, all three Lynch kids — Greg, Jessica and Brandi — were interested in what he had to say.

He talked about the travel, and the training they would get. This was the summer of 2001, before there was even a whisper of war in the air. But “he did not lie to the kids,” Dee Lynch says. He said there was always the possibility of war in the future. “But at that time it was before Sept. 11, and there was no terrorism,” Jessica recalls, “so we were like, ‘That would never happen to me.’”

Jessica Lynch was one of thousands of young Americans who joined the Armed Forces as the only way to get ahead in life, only to find that they might have to pay the ultimate price. Now, years later, Lynch is defined by her experience: she still suffers nightmares and the long term effects of her injuries and the trauma of her capture.

But at least she has one thing: a college degree in Education, thanks to her military scholarship.

Still, Jessica is unable to fulfill her dream. Due to her injuries, she works only sometimes as a substitute teacher. The job allows her the flexibility to live with her disabilities and her pain, which often prevent her from working. She still does hours of physical therapy a week; still wears a brace and has only a numb sensation in one leg.

This is what Neoliberalism has wrought: a 17-year-old high school student wants to become a teacher, but first she has to go to war, become terribly maimed and almost die in order to get the education she needs to fulfill her dream.

The soldiers who fought for the Roman Empire did not do so for “the glory of Rome.” Sure, that was the bravado, that was the official line, but everyone knew that the real reason was money and wealth. For the foot soldier, it was his salarium, or salary, which at one time in the early Empire meant literally a handful of salt a day. For the officer, there was the promise of land, farms and resources from the conquered territories.
Likewise, British soldiers were 100% “paid professionals” up until the first draft in 1916. The empire was built by paid British soldiers as well as mercenaries from all over the globe (Hessians, Gurkhas, etc.).

It is not so different in the US forces today. Sure, many people join the military out of tradition, out of patriotism (as in after 9/11), but for the vast majority of recruits, they join because they, like Jessica Lynch, have nowhere else to goin order to get ahead.

The End of the Draft Poses Challenges

The US had a draft in place all throughout the Cold War, from Korea through Vietnam. But in 1973, under tremendous public pressure, the draft was suspended and replaced with an “all volunteer” military. Reagan sent the National Guard onto the Berkeley campus.

A big part of that public pressure against the draft came from draft-aged men who were attending — you guessed it — large public universities. Ronald Reagan, then Governor of California, raged against “those hippies up in Berkeley” who were demonstrating against the War and burning their draft cards by the bushel. He actually sent in the National Guard to quell protests on campus. Indeed, his harsh and deadly methods were the precursors to more recent deadly police actions against Occupy Wall Street and DAPL.

In Part II of this series, I explained how, under Neoliberalism, putting a price on public higher education had separated America’s young people by class and by money. As I mentioned in Part I of this series, the 3rd Tenet of Neoliberalism states that there are “winners” and “losers”. Starting in the mid-70’s, the country’s public universities became the province of “winners” that were determined not by academic ability, but by the ability to pay.

This all started under Ronald Reagan.

Reagan led a cabal of conservative Governors to start increasing tuition at public universities. There would be no more “hippies” on campus, only smart-dressed kids whose parents could afford to pay their tuition, or else students with loans or grants who could literally not afford to “get into trouble” by protesting. Reagan has a nefarious educational legacy both as Governor and as President.

As Governor, Reagan demanded a legislative investigation of alleged Communism and sexual misconduct at the University of California at Berkeley. He insisted on public hearings, claiming “a small minority of hippies, radicals and filthy speech advocates” had caused disorder and that they should “be taken by the scruff of the neck and thrown off campus — permanently”

Reagan called for ending free tuition at UCAL; instituted a 20% across the board funding cut and all but eliminated school construction funding. Once in the White House, he ramped up his crusade, calling for the elimination of the Department of Education, and cutting Federal funding for education by half. When he was elected the federal share of total education spending was 12%. When he left office it stood at just 6%. The result of this new ideology, this Neoliberal revolution in public education funding was that tuition rates at public universities skyrocketed. Public college tuition skyrocketed after the Draft was abolished. Funny how that works.

While Reagan was slashing Federal funding for education, he was pumping massive amounts of money into Defense. Suddenly, the military had plenty of money available for training, scholarships, college degree and vocational education programs. There is an old saying among people in the military, when they talk about the education, the degrees, the training and other benefits they get from the military:

“Thank goodness I have a rich uncle.”

The “uncle” of course is Uncle Sam. The government — specifically the military, will pay for you to go to college — you just have to volunteer for a few years first. The problem, of course, is that it rarely works out that way. This bait and switch goes on today — even more so because of all the active wars that are going on.
When Jessica Lynch joined, the idea of going into a “hot” war zone seemed remote. Now, anyone joining the military knows they could be in harm’s way just a few months later — despite the recruiters assurances that the odds are “slim” that they will wind up in combat.

This means that every year, it gets harder and harder to lure desperate young people into the armed services. So recruiters have taken to lying more and more. Take college for instance. Only about 37% of applicants ever get into the Montgomery GI bill program. Even then, you are lucky to actually get a degree. Jessica Lynch was one of only the fortunate 15% to do so.

The most deadly form of “intersectionality”

So now we see how it all ties together. The skyrocketing cost of public education at state schools can be traced directly back to the abolishment of the draft. Having college remain economically out of reach for large swaths of the population, while simultaneously offering people a chance to get a leg up on the ladder of success by “serving their country” is a devil’s mixture of cruel neoliberal policy mixed with good, old fashioned racism and elitism. You know that we would not be in so many wars if the sons and daughters of Congressmen were in the front lines.

We can discuss whether or not this was an orchestrated development, but the fact remains that under today’s situation, offering tuition free public college, vo-tech or trade schools and other forms of post-secondary education and training would have an immediate and negative impact on the US military’s ability to recruit people who simply want to better themselves.

Kamala Harris came under fire for opposing early release for nonviolent prisoners because it would deplete the supply of cheap prison labor on which so many of her campaign donors depend. Her lawyers argued that “prisons would lose an important labor pool”. Now, the prison labor program may not have started out to be an indispensable part of the State’s economy, but over time it has become one. The situation is similar with free public education beyond high school. Introducing it would upset the current system.

The next time you see a centrist Democrat or a Republican speak against tuition free college, check out how they vote on war and the defense budget. They probably are big time supporters. Certainly this is the case with Hillary Clinton, Diane Feinstein and many other “establishment” Democrats. And of course it is dogma for Republicans.

But we must not lose sight of the terrible human cost of this aspect of neoliberalism. Jessica Lynch never wanted to be a soldier; she never wanted to be a hero. All she ever wanted to be was a kindergarten teacher.
Yet because her family was poor she had no choice but to join the military in hopes of being able to get her “rich Uncle Sam” to pay her way through college.

The tragic irony to this story is that she did get her degree, but her tour of duty in a war zone left her physically unable to fully realise her goal of being a full-time teacher.

And that is the result of runaway neoliberalism and the exigencies of Empire.

Please also check out the other articles in this series:

This is Neoliberalism, Part V: The False Promise of “Choice”

EuroYankee is a dual citizen, US-EU. He travels around Europe, writing on politics, culture and such. He pays his US taxes so he gets to weigh in on what is happening in the States.
View all posts by Euroyankee →
This entry was posted in Economics, Politics and tagged Neoliberalism. Bookmark the permalink.

3 Responses to This is Neoliberalism, Part III: How We Build Empire