Posted on Sunday, 9 September, 2018 by Euroyankee

I know what it’s like to have your world turned upside-down; soon Republicans and centrists Democrats who cling to the tenets of Reaganomics will see their world rocked by Our Revolution. 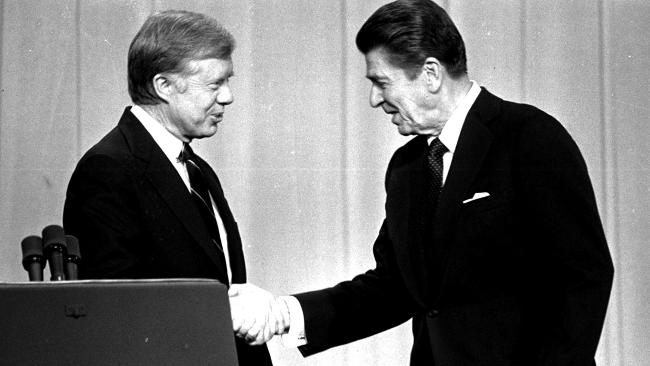 Reagan and Carter debate in 1980 was famous for Reagan’s line, “well, there you go again” to deflect Carter’s (correct) claim that he sought to cut or even eliminate Social Security and Medicare.

In 1980 I was simply amazed when Ronald Reagan, whom I and all my Leftie friends considered to be an absolute joke, somehow won the Republican nomination for President. I thought: the GOP is imploding and this is just another Goldwater who will lose by a landslide and set the Republicans back decades. Needless to say that I was wrong. Flatly, utterly, dismally and catastrophically wrong. But at the time, I was 100% sure that Reagan and his policies were too far Right to ever get elected in the America I knew.

I mean, the only Reagan supporter I knew was my then college roommate, a wealthy Cuban exile who loved Reagan for his authoritarian, militaristic and anti-communist rhetoric, and of course his solemn promise to destroy Castro.

As it happened, I spent that summer of 1980 studying in Italy and then traveling around Europe, where many people asked me my opinion about Reagan. After all, they had only ever seen him in movies, co-starring with a monkey. I answered them forthrightly and sternly: Reagan will NEVER win. He is a Right Wing lunatic, I said. He is opposed to Medicare and Social Security and anything that smacks of “socialism” such as you enjoy here in Europe. He puts corporations over people. As governor of California he called out the Army to quell student protests. Reagan’s political mentor, Barry Goldwater, rightly lost in a huge landslide in 1964, and since then the US had moved even further Left. Since Goldwater’s trouncing, we had witnessed the tragedy of the Vietnam War, the assassinations of MLK and RFK, the rise of the Civil Rights movement. We were a very different country than the racist, warlike America that Goldwater and his protege Reagan represented.

I was convinced at that time, as so many were, that the US was a “center-left” country. Each week we all watched All in the Family on TV and laughed heartily at the bigoted Archie Bunker, whose benighted combination of racism, homophobia, sexism and reactionary conservatism were something that we all knew belonged firmly in the past. On CBS’s All in the Family (1971–1979), Archie Bunker represented the elitist stereotype of America’s white working class — ignorant, bigoted and backward.

We were also laughing at SOAP, another TV comedy about a crazy white, suburban WASP family in which the only “normal” people were the black butler, Benson, and the openly gay half-brother, Jodie (a role that made Billy Crystal famous). The show was popular when it launched in 1977, but was cancelled post-Reagan in 1981.

We were all so modern, so advanced, so progressive. We were driving smaller, more fuel-efficient cars. We were turning down our thermostats and wearing sweaters to conserve energy as President Carter had asked us to. Hell, we were even in the process of switching to the metric system. My sister drove a Chevette. It was the environmentally responsible thing to do.

To me, Reagan was a throwback, an unreconstructed racist Neanderthal who had been the fodder of jokes for years. I was so used to laughing at him in various Saturday Night Live sketches that I literally could not imagine him being President. “Reagan is a fascist,” I told my European friends with complete conviction, “and in America, we fight fascists, we don’t elect them.” This really meant something to post-war Europeans.

When pressed to speculate on a Reagan Presidency, however, I told them — again, in all seriousness — that should Reagan ever become President, the US would fall into fascistic militarism, and he would start WWIII. This raised many eyebrows in consternation, and I felt I had to reassure my European friends. “Don’t worry,” I said. “There really is no way that the American people could ever elect Ronald Reagan. I mean, he’s not just anti-union, anti-gay, anti-woman, anti-peace, anti-student and anti-environment — he’s even against the metric system!”

This last bit seemed to reassure them that surely, electing Reagan was something that was simply beyond the pale.

Well — we all know what happened that November. I was back at college in the US when Reagan won the Presidency. My Batista-loving Cuban exile roommate was guzzling rum and smoking cigars and whooping it up with his friends and family, and I was inconsolable. The impossible had happened. My thoughts turned to all the Europeans who had asked me my opinion on a Reagan Presidency that summer. I wondered how many of them were now building bomb shelters. Gradually, I came to realize that the US I knew had drastically changed. Or perhaps it had never existed in the first place. In any case, I had been so sure, so utterly convinced that we were a center-left, progressive nation that I could not see the “Revolution” that was going on around me.

Reagan’s mantra, that “government is not the solution to the problem, government is the problem” was so foreign to me, so alien, that I could not grok that people could be led to believe it. I was a kid raised by parents who grew up under FDR’s New Deal. It was baked into our lives. I was a die-hard Democrat whose immigrant grandparents had a portrait of JFK in the living room alongside the other Catholic saints they revered. I had canvassed for McGovern. Hell, I still had a huge poster of RFK on my bedroom wall back home.

And yet — there it was. The people had been convinced. The union members who had prospered from their high wages and “Cadillac” benefits had voted for a guy that was about to take all that away, and they were happy to do so. Maybe they were tired of being lampooned on All in the Family. Maybe an openly gay man as a sympathetic TV character was a cultural bridge too far. In any case, the so-called “Reagan Democrats” had proven that the country had truly been transformed, and progressives like me were now outside the mainstream. PATCO – the Air Traffic Controllers’ Union – was “busted” by Reagan when he simply fired them all rather than accede to union demands.

It has been almost 40 years since the widely hailed “Reagan Revolution” took place, and I believe that it has — finally — culminated in that fascistic militarism that I knew Reagan and his brand of politics represented — complete with the renewed threat of WWIII. Indeed, there is a direct line from Reagan to Trump — and if you doubt that fact, I refer you to the motto of both the Trump and Reagan campaigns: “Make America Great Again.”

Reaganism has been running roughshod over the American working people for decades, but the worst extremes of Reaganite Neoliberalism were long held in check by the Democratic Party. That has all changed over the past 25 years, as the Clintonite “New Democrats” joined with the Reaganite GOP to expand war, coddle the rich and cut help to working and poor people.

In short, Trumpism is simply the purest form of Reaganism, and whatever masks were used in the past to disguise the ugly face of Reagan’s Neoliberalism have been cast aside in the Age of Trump; the dog whistles that were used to signal all manner of cultural extremism have been dropped. Those vile messages are clear and open now. The “conservatism” that was so cool, so radical, so “revolutionary” when Reagan took power has now reached its purest form, its apogee, its non plus ultra. And my conservative friends are celebrating once again.

But things are about to change.

I relate this story today because I am seeing it all happen again, but on the other side. My conservative friends and the Reagan-loving centrist Democrats that I know are failing to see the great transformation that is taking place. When Alexandria Ocasio-Cortez won her Primary in NY, FOX’s Sean Hannity gleefully put up a list of all the”far left” and “socialist” policies she stood for, such as Medicare for All, tuition-free college, affordable housing, a job guarantee, etc. I am sure that Hannity thought this would somehow hurt or discredit AOC. Instead, just the opposite happened: people used screenshots of that list to promote AOC and her agenda all over social media, and to mock and condemn FOX as being against what everyone now considers to be reasonable. This screen shot bounced all around Twitter for days, with major LOL’s going to Hannity.

It has been almost 40 years since the widely hailed “Reagan Revolution” took place. Now there is a new Revolution afoot in the land, and I am sorry (not sorry) to have to tell my conservative and centrist friends that the pendulum is swinging back, and that payback is indeed a bitch, bitches.